Fear can be fun—at least with Magic and Innistrad: Midnight Hunt's Booster Fun variants. As the bright Summer of Legend wanes, hideous things begin to claw their infernal ways from the deepening shadows of ancient forests, forsaken mansions, and isolated villages. For Magic's latest set, the artistic teams have plumbed the inky abyss to reveal the nightmares that will haunt your collections and vex your opponents!

Booster Fun variants spice up the contents of booster packs by introducing exciting card treatments to select cards. Card treatments are visual enhancements that make a card stand out from the rest through extended art, borderless art, thematic frames, and even alternative artwork from different artists offering their own unique vision of a Magic card.

Innistrad: Midnight Hunt continues to expand Magic's card treatment palette with amazing perspectives on the brooding, gothic—and, in this set, often furry and fangy—land of Innistrad. You'll discover the work of a host of creative people from across Magic when you open Draft, Set, and Collector Boosters.

Horror isn't new to Magic, and throughout the game's history, horror has manifested in a variety of ways, from the cosmic to the psychological to the gothic. Innistrad is a huge fan favorite, and the setting has reveled in all things creepy over the years. This can present a challenge when returning to a beloved and familiar place.

"In some ways it was harder," said Creative Manager Tom Jenkot. "We know this world and what it looks like. That always helps us make resonant card treatments."

Art Director Ovidio Cartagena also recognized the weighty expectations of a return to Innistrad. "It is always a challenge to revisit a famous and well-known set, because you have to fulfill expectations as well as bring surprises to fans. We don't want to go off-brand, but we also want to thrill audiences by showing them parts of Innistrad they haven't seen before!"

Ovidio is a huge horror movie and literature fan, so he has a deep well of creative influences he can draw upon to find inspiration. "I've read every gothic novel I've been able to find, from Charles Maturin to H.P. Lovecraft," he said. "I found myself watching the horror classics from Universal, which got me into the 'thrilling' aspect and moody tonal compositions that are so effective in horror.

"I also did a deep dive into comic book horror, the legendary Dracula and Werewolf by Night run from the 70s, and all the way through Swamp Thing, Animal Man, and more modern takes like Hellboy, Southern Cross, and Pretty Deadly. I was also very moved by Bernie Wrightson's illustrations for Frankenstein and Stephen King's Cycle of the Werewolf," said Ovidio.

The Work Behind Booster Fun

Booster Fun work began with a sync-up between people like Tom, Senior Graphic Designer James Arnold, and UX Designer Daniel Holt with Senior Art Director Taylor Ingvarsson. Together, they explored the artistic vision of the world of Innistrad: Midnight Hunt.

The internal world guide offered insights into the vision of the set. "The world guides are kind of like horror novels," says Tom, referring to the sprawling document created for each set that lays out the creative vision and stories that drive it.

Of course, visuals were a big part of seeing the plane of Innistrad in the new set. "Taylor and his team of concept artists did a great job building the set visuals and the motifs that we used in the card set," said Ovidio.

"There are two four-by-eight-foot whiteboards that hold all the concept art for a set, jammed with all sorts of amazing and terrifying things," said Tom. "Thanks to the team of concept artists that were hired for making that wall, we had all the inspiration that we needed!"

Werewolves and Warlocks play major roles in Innistrad: Midnight Hunt, and they get special attention with the showcase equinox card treatments. 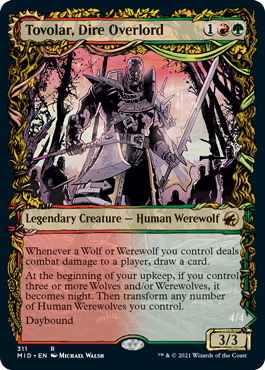 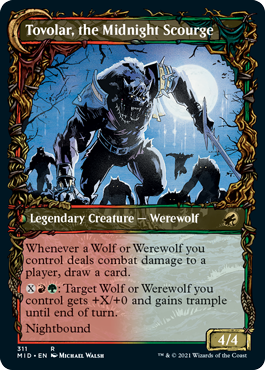 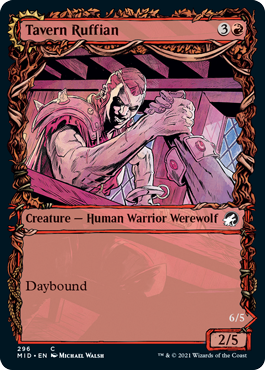 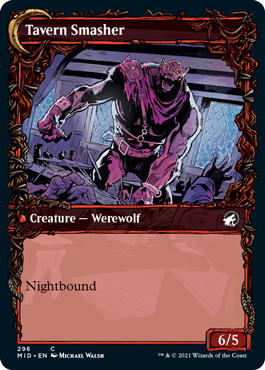 Lavish and twisted in their detail, the equinox card treatments didn't arrive fully realized and infused with their dark and evocative beauty; it took brainstorming and work. "The goal to align a card treatment with the werewolves came first," said Tom. "We knew we wanted that to fit with the big story movements."

It took some effort to visually define what would work. "We had to push harder on this than most, and lots of stuff didn't make it," said Tom. "Ultimately, the frame design came in as a sketch from the amazingly talented Justine Jones."

Justine's work has been showing up a lot in Magic recently, including in the Secret Lair drop Kaleidoscope Killers, and among the showcase rulebook card treatments from Dungeons & Dragons: Adventures in the Forgotten Realms.

Once the team had the design, Senior Graphic Designer James Arnold tweaked and colored the frame. Digital Artist Brandon Bailey got it production ready, making the colors feel as natural as possible in the dark and moody set.

Tom worked with Ovidio to match art to the equinox frame. "Ovidio is super talented and did most of the work here," said Tom, "including finding and art directing the images for the equinox card treatment. So many standout artists did amazing things here (and for future sets that we can't talk about yet!)."

As a horror comic fan, Ovidio was excited for the opportunity. "I got the chance to hire some Eisner Award-winning horror comic book artists like Emma Ríos and Michael Walsh, who turned in stellar work; spooky stuff."

The sun is checking out of the land of Innistrad. The days are getting shorter, while the longer nights breed greater terrors. Werewolves and Warlocks can revel in their showcase equinox card treatments, but the showcase eternal night card treatments are the province of the other denizens of Innistrad, and they capture the singular look and feel of that hope-draining threat of a night without end.

"For the eternal night cards, it was a straighter line from concept to completion," said Tom. "The hardest part was pitching the idea (black and white cards!?), and then finding and working with the artists."

Art Director Crystal Chang oversaw the eternal night card treatments, including finding, hiring, and directing the artists. "The eternal night lands and creatures project was fun and refreshing to collaborate with Tom on," she said. "[We] aimed at creating a visual style heavily inspired from classic black-and-white horror movie posters; think classic pulp illustrations of Frankenstein and Dracula with high contrast, dramatic lighting, and a dab of classical etching style."

Eternal night cards—both non-foil and traditional foil variants—also received a special gloss varnish on the pin-line of the frames, as well as the mana symbols on eternal night basic lands, to give these elements a subtle, elevated shine. 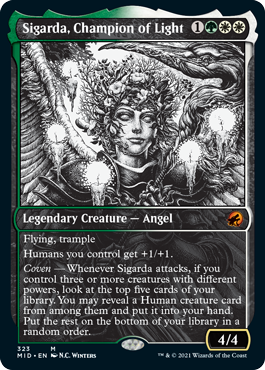 The eternal night legends card treatments evolved throughout the process, arriving at a concept that hit the right notes. "We focused on building the tension and eeriness of the characters and let the artist develop the narrative in their own unique style while ensuring it was consistent throughout the series," said Crystal.

"Black-and-white movies inspired the eternal night basic lands," said Tom. "Old horror movies that had ominous moments conveyed in shapes and with dramatic lighting. Things that look so much more dramatic in black and white."

"For the lands, we were visually aiming for the dynamic cinematic landscape tone where it left viewers awed at the setting," said Crystal. "We wanted the viewers to truly feel and see how grand Innistrad is." 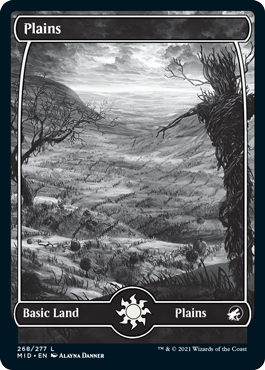 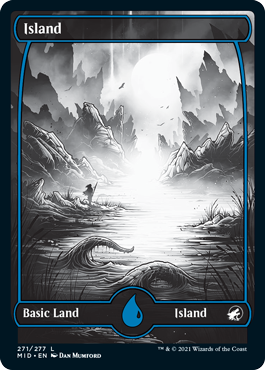 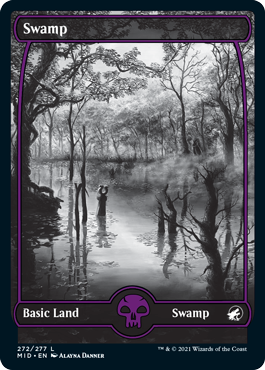 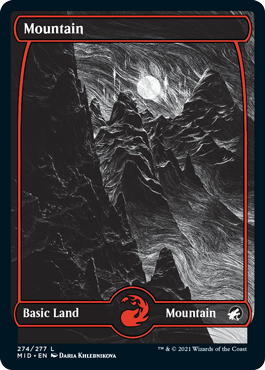 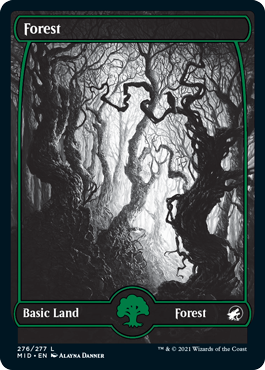 "I loved the idea of a completely colorless land," admits Tom. This is where the idea started, but playability also had an influence on the final result. "Eventually we knew it might cause some issues if players couldn't identify cardseasily," he said. "So, a little bit of color was introduced. It's like the best of both worlds with the black-and-white art and the subtle pin-line. It really makes the cards look great—betterthan all black and white as I look back."

"I'm very proud of what each illustrator produced in this set," said Crystal, "and hope the fans enjoy it as much as I did working on the project."

Magic has a long tradition with dazzling foil cards in each set, and that continues in Innistrad: Midnight Hunt. Premium techniques that illuminate hoarfrost and candlelight and display the effects of the sun and moon were made possible thanks to a talented team that included Kevin Yee, Silvia Cortese, Steph Cheung, J. Lonnee, Brandon Bailey, and Marsha Rivera.

"Working on a set like Innistrad: Midnight Hunt is different because it is a darker-than-usual set," Marsha said. "What I mean by that is that the art in particular has a darker undertone The premium treatment has to be adjusted in order for the highlights and shadows to play well with each other on foil substrate. It's a delicate balance of knowing how much is too much and when there is simply not enough."

Marsha also found inspiration from horror movies. "I watched movies with vampires and werewolves to spark ideas of what gleams in the moonlight versus what might fall flat, how shadows and light play important roles in the way the premium treatment of the art might look on foil. The art is so elegant in Innistrad: Midnight Hunt, the colors very saturated and vibrant! I was around to work on Shadows Over Innistrad and remember the darkness, the gleaming eyes, the blood and luster of the lavish embroidery of the clothes. Innistrad: Midnight Hunt does not disappoint in this category!"

You'll discover other types of Booster Fun variants in Innistrad: Midnight Hunt, too. There are 92 rare and mythic rare extended-art cards (only in Collector Boosters) and three borderless planeswalkers, of course. 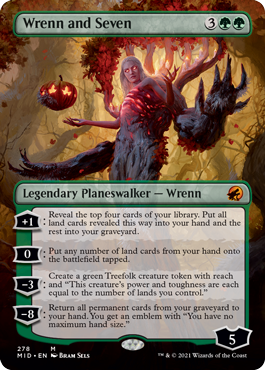 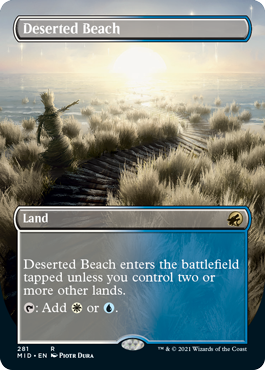 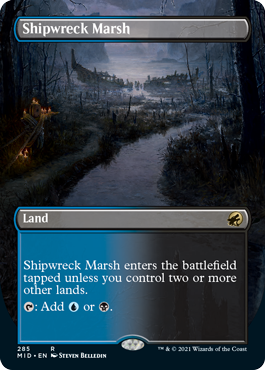 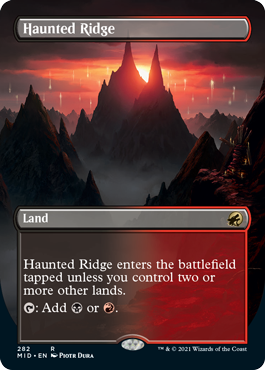 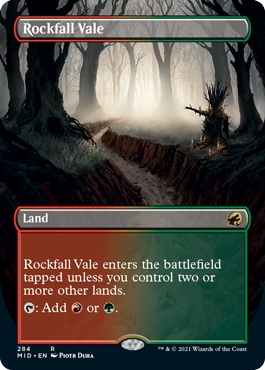 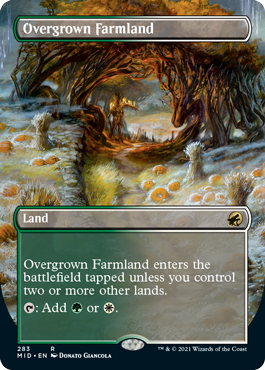 So, now that you know what you can find in Innistrad: Midnight Hunt, you'll want to jump over to Mike Turian's article to learn where you can find these Booster Fun cards! You can also watch Gavin Verhey's Good Morning Magic video covering Booster Fun below: