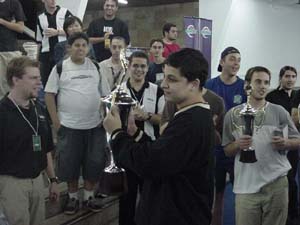 Grand Prix Goliath Alex Shvartsman has once again plowed through the draw, guiding his Finkula deck all the way to the finals with only one loss in the entire tournament. His opponent, Brazilian Guilherme Dei Svaldi, has morphed the popular Three-Deuce archetype into an interesting deck reminiscent of the 5-Color Green decks of years past. Dei Svaldi stormed into the finals with an upset win over Antoine Ruel. There is no question that the Brazilian crowd will explode if their native son emerges victorious.

Shvartsman does have a significant advantage in what could be considered his most favorable matchup of the top 8 decks. Dei Svaldi has only 4 Swords to Plowshares to handle Shvartsman's Spectral Lynxes, Meddling Mages, and Shadowmage Infiltrators. Furthermore, he has useless Wax/Wanes and a low number of threats for the American. It would take nothing less than a small miracle for the Brazilian to win, but with the crowd on his side anything is possible.

Shvartsman starts off with a five land, two spell draw, but fortunately for him, Spectral Lynx is one of those two spells. Dei Svaldi plays two Mother of Runes in the opening turns of the game, and as Alex continues to draw land the board is uneventful. A Granger Guildmage spices things up a bit as the players trade life points for several points until Shvartsman plays a Finkel. Dei Svaldi did not have the Plow, so a rampaging Finkel puts Shvartsman in a strong position. Dei Svaldi managed to turn things around, though as he played Quirion Ranger and a Call of the Herd token. Meanwhile the only creature that Shvartsman draws from his Finkel, Meddling Mage, is killed by Granger Guildmage. He does have two Plows, however, so when Dei Svaldi initiates some beatdown by giving his Elephant token protection from white Shvartsman is able to use his two Plows to get rid of one Mother of Runes. With no answers to the Elephant token Shvartsman dies soon thereafter.

Shvartsman sideboards in 4 Perish and 1 Seal of Cleansing for 2 Gerrard's Verdicts and 3 Cursed Scrolls. Dei Svaldi has much more action as he takes out 2 Granger Guildmages, 3 Wax/Wane, 2 Phyrexian Furnace, and 2 Seal of Cleansing to make room for 4 Pyroblasts, 4 Bottle Gnomes, and 1 Choke. 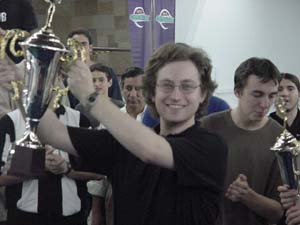 Dei Svaldi starts game 2 with a mulligan, and his six card hand contains only one land, a Rishadan Port. He does not draw any further land until turn 5, and by then his port has already been Vindicated. He scoops on turn 6 with one land, facing down an army of Meddling Mage, Finkel, and Masticore.

Dei Svaldi has a solid start this game, summoning a Birds of Paradise on turn 1 and a Quirion Ranger on turn 2, enabling him to cast a Bottle Gnomes on the same turn. Shvartsman has another 5 land, 2 spell draw, and he sighs at the hand he know he must keep. He plays a Spectral Lynx on his second turn but Dei Svaldi has the Plow, and another Bottle Gnomes as well. A Gerrard's Verdict from Shvartsman nets Choke and a land, leaving Dei Svaldi with only one card. During the next several turns Shvartsman uses Seal of Cleansing on a Bottle Gnomes and Dei Svaldi summons a River Boa. The Boa dies in short order to a Perish, and Shvartsman's Finkel is on the receiving end of a Pyroblast. All the while the lone Bottle Gnomes have knocked Shvartsman to nine life, when Dei Svaldi draws and plays Call of the Heard. Shvartsman plays another Finkel but it is consigned to chump-block duty as Shvartsman draws more and more lands. At the end of the game he had drawn twice as many lands as spells.

In Biblical fashion, Brazil's David had triumphed over the two Goliaths of the top 8, Antoine Ruel and Alex Shvartsman. The roar of the crowd as the Elephant token swung for the last three points of damage was deafening, much like the crowd at a Brazilian football (soccer) game. Guilherme Dei Svaldi has defended the honor of Brazil and foreigners will have to wait until the next Brazilian Grand Prix to dethrone him.