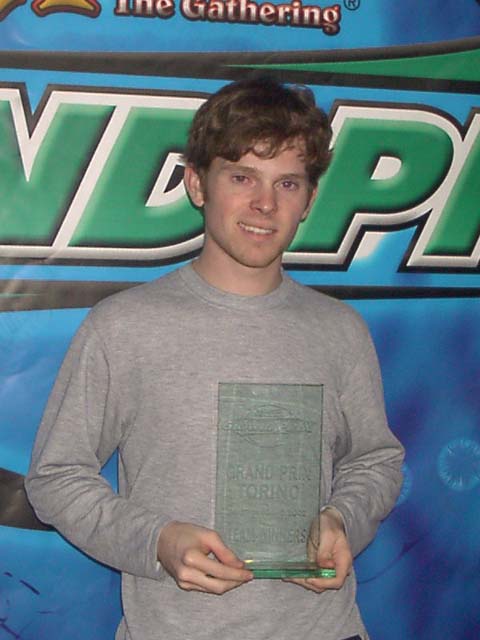 Pro Tour Barcelona semifinalist Dan Clegg, known to some as "the Slug", faced of against Noah Boeken, current European Champion. The draft was full of strange situations, as complains about differences in the times to draft and internal conflicts between members of www.alphabetaunlimited.com. During deck construction, Ryan Fuller had to calm Chris and Noah down and build some confidence for the final games.

They were extremely tired despite the free round when they took an Intentional Draw and when the draft got out of control they couldn't react fast enough. That might, or might not, hurt in this final but they have surely learned how to deal with it in the future.

We follow the game between Dan Clegg and Noah Boeken, a match almost everyone expected Clegg's Kavu horde to win. Not only did he seem to have a better card pool but Noah was very, very unhappy during the building period.

After some extensive shuffling they finally decided to get the final underway after a friendly agreement that winner's would pay dinner to the losing team. They dropped lands for a while until Boeken played a Ancient Kavu to which Dan responded accordingly with a Kavu Monarch.

Noah used a Singe and a Scorching Lava and Clegg replaced it with a Mire Kavu.

Chris: "Have you seen that card before? You didn't seem to want it." (referring to one of the situations from the draft.

Noah sent the Ancient into the Mire Kavu and casted an Hypnotic Cloud with kicker getting Shivan Zombie, Kavu Scout and Hunting Drake into Dan's graveyard. Now with "only" three cards in hand Dan played a Phyrexian Slayer and attacked with it.

With Noah not doing anything Dan Recovered the Monarch and played it after Noah dropped a Plague Spitter. Again the Slayer hit Boeken and the Monarch came back. The Spitter held on in defense waiting for the incoming Monarch.

Noah: "That was the worst draw I've ever seen. This will be an expensive dinner."

The Monarch came in and the Spitter took him down. A Phyrexian Reaper join Clegg's side after he played his first Island. Noah dropped a Viashino Grappler and a Firebrand Ranger. A Plague Spores blew up the Grapple and the Sulfur Vent opening the road for Reaper.

Noah seemed more interested in watching their teammates' games than his. The Ranger chumped the Reaper and Noah played a Rith's Attendant to try to block but Dan removed that last blocker to win the game, not before Noah took a good look at Clegg's graveyard.

While they were silently sideboarding and shuffling Ryan and Peter were locked in a huge creature battle that Ryan ended up winning with a Cloaked creature. Not an Armadillo Cloak, a Traveler's Cloak. Benafel and Rider where still locked in some sort of creature war that involved a Marsh Crocodile and a Metathran Zombie with Justin being on the losing side of the damage race.

Chris: "That was the worst card I could've ever drawn... I mean: Tight!"

As Noah took a mulligan their spirits were exact opposites. Dan was extremely calm and with a low voice pronouncing every word very, very slowly. Noah, on the other hand could hardly keep seated. He cursed his deck, hit the stuffed duck, talked to everyone, commented on the games... he was either a nervous wreck or simply filled to the brim with adrenaline. 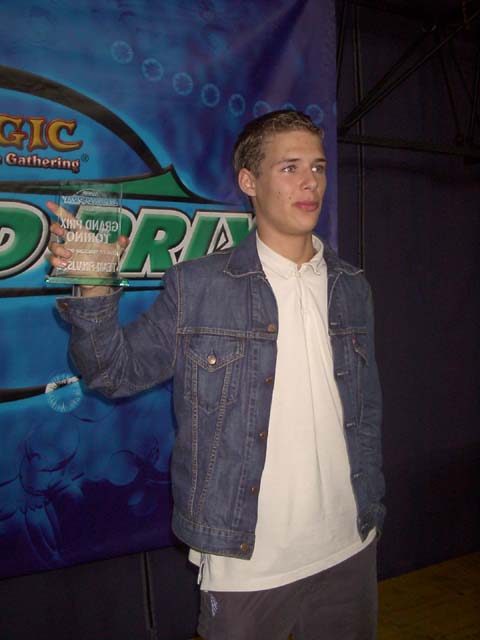 Dan took a mulligan as well and played a second turn Shivan Zombie. Noah dropped a Caldera Kavu and took the damage as Ryan Fuller finished his match with a clean, and very fast, 2-0 result. Clegg played a Kavu Scout and a Kavu Monarch as the first middle game finished after Justin Rider spent a full five minutes considering Chris last ditch attack, which turned out to be a bluff since he didn't have any trick up his sleeve.

Ryan: "Noah, hold your hand up!"
Dan: "Let him hold his hand anyway he wants to!"

Boeken was in trouble when Dan played another Kavu Scout pumping his Monarch. Somehow Clegg sent in to get blocked by the Caldera Kavu and Phyrexian Slayer. Noah still had three creatures to deal with and he dropped an Ancient Kavu, which was the biggest creature in the table. That seemed enough until Clegg Recovered the scary Kavu Monarch.

Noah played a Rith's Attendant to put at least a temporary restraining order on the Kavu Monarch. On the next turn he played another Attendant, this time Treva's, while Clegg played a Mire Kavu upping his Monarch to a 4/4. Noah added a Firebrand Ranger to the growing table but Clegg was more offensive dropping a Thunderscape Battlemage with black kicker, causing Noah to discard two Mountains.

Clegg finally had an attacking creature: a kicked Pouncing Kavu. The Mire Kavu followed him into the Red Zone. Dan still held his other three Kavus and the Monarch back while Boeken tried to find a way to turn a game where he was in big trouble. Noah blocked the Pouncing Kavu with the two Attendants losing one of them.

A Plague Spitter joined the defensive wall. The Mire Kavu attacked once again and for a chance Dan Clegg seemed to be on the receiving end of a long deliberation period. Noah seemed to be having a hard time focusing on the game looking more often at the match on the middle table than at the scary red horde looming across the table. Finally the Dutch blocked the Mire Kavu with the Firebrand Ranger and the Ancient Kavu.

The Spitter attacked and Clegg sidestepped it. He then Singed his own Spitter to kill four 2/2 creatures on the opposite side of the table and played a Kavu Recluse. Distracted by the other game Noah blocked the Monarch with the Ranger and the Attendant. That seemed like a bad play until Noah Singed the Monarch to finish it off.

Justin: "Can you make him do something?!" To get Benafel to actually do something instead of just staring into emptiness in the brink of destruction. The departure of the Monarch seemed to totally shift the table. Clegg all of the sudden was playing Draw-Go while Noah was back in business. A Crosis' Charm killed Noah's next Ancient Kavu and Dan played Nightscape Master and a Phyrexian Slayer.

Noah played a Bog Down with kicker but it was too little too late. Clegg played a Phyrexian Reaper and after playing a Recover Noah Boeken conceded a few moments after Benafel conceded his match facing a horde of creatures and a Samite Archer.