Finals: Your Move Games vs. The Ken Ho All-Stars 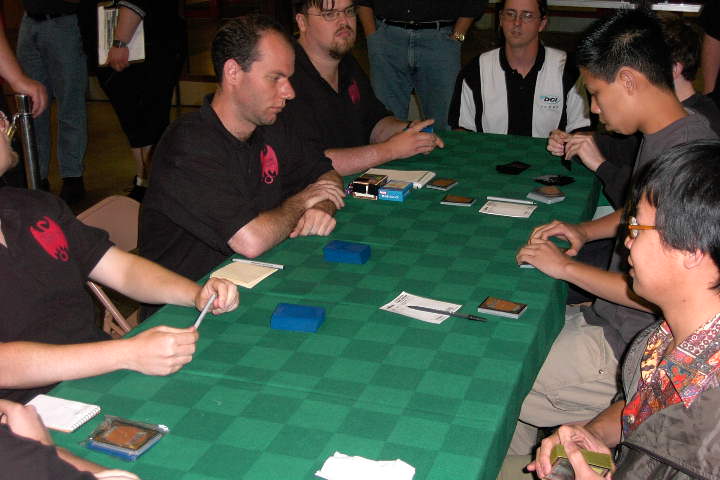 Your Move Games vs. The Ken Ho All-Stars

It was East Coast versus West Coast in the finals of Grand Prix Columbus. It was Boston versus San Francisco. It was Old School versus New School.

There hasn't been a team Grand Prix on this continent without Your Move Games in the Top 4. The didn't win either Pittsburgh or St. Louis, but they sat down across form the Ken Ho All Stars trying win Columbus. Neither team had lost all weekend - each had 2 byes, 7 wins, and 2 draws.

Dan Clegg is trying to win his third consecutive team Grand Prix! He won Turin on a team with Peter Szigeti and Brock Parker. He won Taipei last weekend as a member of team AlphaBetaUnlimited.com along with Chris Benafel and Dave Williams (who claims to have taught Clegg everything he knows about team drafting with Apocalypse). And now he and the Ho's (Lan and Ken - no relation) are trying to make it three straight. Clegg has been around the Pro Tour for years, but he's really come into his own this season with 5 Grand Prix Top 8's (including the two team wins) and two Pro Tour Top 8's (New York and Barcelona). A big part of his improvement came when he started playing a bit faster and stopped picking up as many draws. Ken Ho is also having a solid year - he came into the weekend second in the Rookie of the Year race and by making the finals had moved into a tie with Lawrence Creech for first. A win in this match would give him the lead going into the final event of the season - Worlds.

The two teams had the same basic strategy, the same one everyone else seems to have right now - draft a black-red deck (on the right, sometimes splashing blue), a blue-white deck (usually in the middle and splashing either red or black), and a green deck (which can be anywhere from 3 up to 5 colors). The draft quickly settled down into three mirror matchups.

Kastle's favorite strategy for the black-red mirror is to splash blue for Kavu-hosers. He takes Shoreline Raider and Coastal Drake very aggressively, figuring they'll be very good against his opponent's red creatures. His opponent in the finals is Clegg, whose mirror match technology consists of accumulating many copies of Recover or Urborg Uprising so he can gain card advantage and get his creatures back after his opponent uses up removal. Clegg only wound up with two Kavus (one of which was Flametongue) and Kastle only wound up with one blue card in his deck - a lone Shoreline Raider. Clegg limited himself to two colors.

Humpherys likes to splash black in the mirror matchup so he can utilize discard spells like Hypnotic Cloud and Bog Down to win the card advantage war. Ken Ho opted for a red splash instead. Rob Dougherty has a fully 5-color green deck for his matchup against Lan Ho while Lan limited himself to green, white, and black. 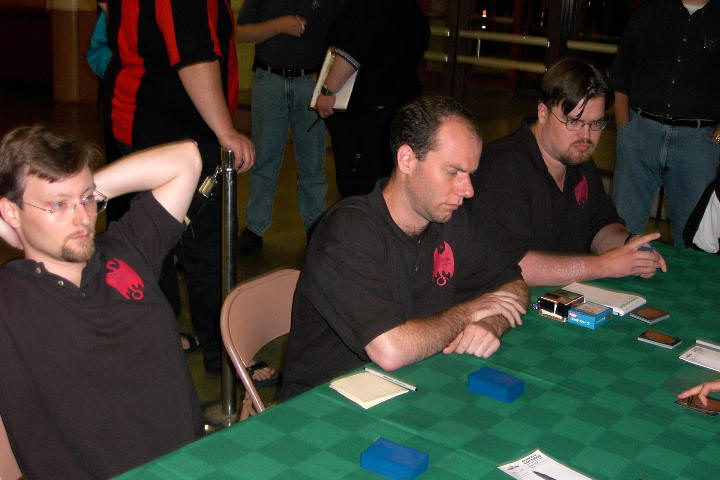 Kastle's turn 4 Marsh Crocodile was huge in game 1 against Clegg. Clegg tried to double block it with Thunderscape Battlemage and Zombie Boa, but a timely Singe ruined his plan. Clegg started to recover with Recover, but it took him several turns to get enough creatures into play to even think about blocking again. The math all changed when Clegg drew his Flametongue Kavu. Bye-bye Croc and then bye-bye Urborg Phantom, which Clegg blocked because he wanted his kavu dead anyway since he had Urborg Uprising in his hand. Clegg wound up at only 4 life, but he did finally stabilize the board. He still had a hand full of cards when he did it while Kastle was playing pants down Magic - no cards in hand at all. Clegg's hand at this point was Agonizing Demise, Agonizing Demise, Terminate, Flametongue Kavu, and Firebrand Ranger. The rest of the game took a while, mostly cause Clegg reverts to old habits when he's playing an untimed match, but Clegg did eventually win.

Dougherty's draw came up beautifully for game 1. Quirion Trailblazer and Urborg Elf made sure he had access to all five colors and then he just played bomb after bomb after bomb. Coalition Honor Guard, Consume Strength, Jilt, Stone Kavu. OK, Stone Kavu isn't exactly a bomb, but it was a body he could attack with. Even doubly kicked Necravolver from Lan didn't slow him down and he still had Keldon Necropolis available in case anything went wrong. Lan tried to slow him down with an Overgrown Estate, but Thunderscape Battlemage with both kickers dealt with that and half of Lan's hand Dougherty had the win in hand two turns later.

Humpherys fought a valid fight in game 1 against Ken Ho, but he was fighting with one hand tied behind his back because he never drew white mana. Cavern Harpy did its best to hold off Ho's Wings of Hoped Minotaur Illusionist, but Rushing River cleared a path and there's only so much one Cavern Harpy could do anyway. Game 1 went to Ho.

Dougherty's superior card quality carried him again in game 2 versus Lan. He used Shivan Emissary to get rid of a Charging Troll than Lan had Eladamri's Called for. He then used Jilt to return the "Nekrataal" and kill Lan's Quirion Elf - which was his only source of white mana. Lan proceeded to draw another Quirion Elf, followed by the land he needed to summon a fully charged Necravolver. He hoped that a 5/5 trampling spirit linked guy would be good this game. AEther Mutation turned it into three Saprolings and made Lan cast it again. Repulse then cleared a path and suddenly Lan was at 1. There wasn't any way for him to play enough blockers or gain enough life so Dougherty had match 1 on behalf of Your Move Games. He then had to sit back and watch his teammates, each of whom was down a game.

Clegg's deck was still better than Kastle's in game 2. Flametongue . . . Demise . . . Kastle actually almost stabilized in game 2, but Clegg top-decked a Recover, regrew his Flametongue, as the illusion of closeness was shattered. That left it all up to the control decks, with Ken Ho up 1-0.

Humpherys played a Planeswalker's Scorn early in game 2, and it cleared away Ken's whole team over the next few turns. The Planeswalker enchantments are a lot better against decks that intend to hold cards in their hand. Ken had looked calm, cool, and collected during the draft, but he made some rookie mistakes in the finals. He played out his Shifting Sky, named white, and then was surprised when Humpherys' Cavern Harpy just stayed in play without gating anything. He also played an Allied Strategies, paused to see if Humpherys was going to respond, and then tried to change one of his lands into a new basic land type. His pause was ruled (properly) as a de facto yielding of priority. When Humpherys yielded it back, no more responses were allowed and the spell resolved. Ho later used Rushing River to bounce the Scorn back to Humpherys' hand so he could counter it with Jaded Response on the way back down. Since all permanents were white, Ho assumed this would work. It doesn't. The Scorn is still a black spell - it doesn't become white until after it resolves. Two more creatures died on Humpherys next turn, bringing the total body count to 5, and Ho went ahead and conceded 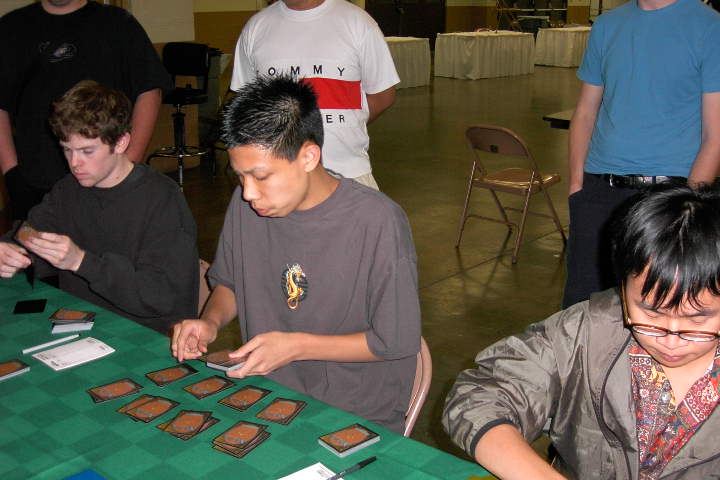 Ken Ho and Dave Humpherys then played a solitary game of Magic to determine the outcome of the Grand Prix. Ho started out very aggressively, with an air force of turn 2 Stormscape Familiar, turn 3 Razorfoot Griffin, and turn 4 Living Airship. Humpherys didn't have any fliers in his draw, but he did have a Samite Archer and his Sea Snidd gave him some dream of racing by attacking back on the ground. Ho also played the turf war game that fellow San Franciscan Ben Rubin has been known to play - aggressively placing his lands and creatures such that they cover two thirds or three quarters of the available play space. Humpherys played a Faerie Squadron, but Ho used Rushing River to bounce both it and the Snidd. Crunch . . . Ho's fliers came over ad dropped Humpherys to 9. Ho's Reef Shaman then changed Humpherys' second island into a plains in an attempt to keep Faerie Squadron trapped in the Hump's hand. It didn't work - Hump had another island. That left Ho changing around his own land so his main phase Worldly Counsel could look at 3 cards. He desperately wanted a way to be able to keep attacking with his fliers. He didn't find one with his Counsel, but Allied Strategies for 3 dug him a little deeper. Meanwhile Humpherys killed the Razorfoot with Manacles of Decay and started attacking with the Faerie Squadron plus his Sea Snidd. The damage was adding up quickly and Ho was in trouble. It seemed like a Faerie Squadron of his own should help, but Humpherys' Samite Archer was just dominating the board. Ho tried to create a big enough flier with Squee's Embrace, but the Hump had the answer for that too - Aura Blast. Ho was forced to chump block, then drew one more card, then extended his hand. Your Move won!

The All Stars seemed to have better decks, but experience and wisdom triumphed in the end.