The third set in the Time Spiral block, Future Sight features 180 cards with randomly-inserted premium cards. All cards in the set are tournament legal. It will be available in booster packs, theme decks, and Fat Packs. 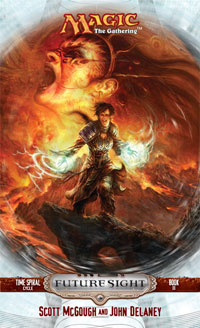 by Scott McGough and John Delaney

It’s Time to Make a Stand

Three more planeswalkers are dead or lost. How many more will allow themselves to be led to the slaughter? It’s not easy to convince godlike beings to risk their lives on the word of a man known for his lies. But the fate of the multiverse depends on it.

For once in his life, Teferi can’t run away.

he quest to mend Dominaria’s temporal and planar damage continues. A temporal rift connected to an alternate Dominaria has enabled Phyrexian horrors to cross over into the present day. Freyalise is gone, having given her planeswalker spark and her life to close that rift, thereby protecting her sanctum of Skyshroud one last time.

But time fractures still plague Dominaria. The damage to the planar fabric at Tolaria was so severe that it couldn’t be healed—not in the present day. The heroes seek out the planeswalker Karn, the only being ever to travel through time. To heal Tolaria’s rift, Karn uses the full extent of his planeswalking power to enter the rift and return to the past, to the moment before the archwizard Barrin cast a spell that obliterated countless Phyrexians and himself. Karn succeeds and seals the planar rift before Barrin’s actions can rip it open. In the next moment, Karn is lost.

Even as Venser begins to realize his full potential, the planeswalker Jeska returns to Dominaria for the first time since Karona fell. Her friend and ally Karn is gone, and someone will pay. An ancient, evil intelligence drives Jeska’s wrath and threatens to undermine Teferi and Jhoira’s efforts to complete Dominaria’s healing: Leshrac has returned. 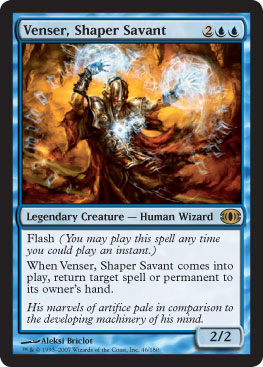