and enchantments are a lot alike. They both represent magical noncreature objects that just sit out on the board having some sort of effect. (Real specific, huh?) Artifacts just bridged much of the gap between the two card types with the introduction of Equipment in Mirrodin, a kind of local artifact. The only difference between Equipment cards and local enchantments is that Equipment is eight million times better: It can move around, it doesn't set you up to be on the wrong end of a 2-for-1, and any color can use any Equipment. Now another advantage that enchantments used to enjoy exclusively has been wrested away by those greedy, greedy artifacts. Introducing . . . the artifact enchantress. 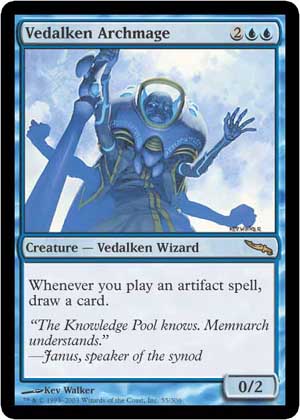 It's just one more step in making enchantments totally obsolete. Not that I want to start any crazy rumors . . .

Well, it seems that I haven't been granted permission to preview any other Mirrodin cards. You know, it's would be a lot easier to write about a new set's artifact enabler if I could use any of the new set's artifacts. But hey, with Vedalken Archmage out, you'll draw a card when you play, um, Soul Foundry and Extraplanar Lens!

Luckily, plenty of other fun artifact cards have been printed. None in the past three years, but there used to be lots of them. I think it was back when white was good, which makes sense, because for some reason, white cards and artifact cards are now the same color.

Before I get to the goods, however, I want to mention a couple of ways that Vedalken Archmage doesn't work. I have to, or I'll get mail for days chiding me for missing out on a great combo. It doesn't exist, people. Churning out Ornithopter tokens with your Soul Foundry is not a good way to draw cards off the Archmage, because the Archmage only lets you draw a card when you play an artifact spell. I repeat: You have to play a spell. Putting a token into play won't trigger the ability. Neither will Tinkering out an artifact or returning an artifact creature to play that's been removed with Astral Slide. What about using the thing Randy is previewing tomorrow? No, that doesn't work either.

But there are combos that do work. Like playing an artifact creature, bouncing it to your hand, and replaying it. That's especially good when the artifact costs a whopping 0 mana. Repeatable bounce is tricky, though. I chose Erratic Portal over Equilibrium because the Portal's an artifact, and for Equilibrium to work, you need another creature already in play. But you have to tap the Portal to activate it, so the combo doesn't get too far . . . without a way to untap artifacts. Hello, Aphetto Alchemist! But you have to tap the Alchemist to activate it, so the combo doesn't get too far . . . without a way to untap creatures. Hello, Intruder Alarm! (Be warned: This is a sickeningly egregious use of Intruder Alarm.) Since you already have an artifact creature coming into play, the Alarm will keep the merry-go-round spinning for a while. Still, Erratic Portal costs 1 to activate. Without some way to produce mana, you're limiting yourself to only drawing cards equal to the number of lands you have. That's unacceptable! How to produce mana . . . artifacts . . . full hand of cards . . . untapping creatures . . . Metalworker? (Be warned: This is also a sickeningly egregious use of Metalworker. Oh, the desecration of such holy combo pieces in such a monstrously goofy deck.) Or how about Mana Echoes? At this point, the only two things the deck was missing was a way to take advantage of all the artifact creature bouncing, and any shred of sanity. I had long since abandoned sanity, but an R&D member helped me out with the first part. Unfortunately, said person is so ashamed of suggesting such an awful card for such a ridiculous deck that he or she requested anonymity. I'll begrudgingly respect that wish, but you've gotta admit that using Furious Assault as the main victory condition is a divinely low idea.

An awful lot has to go your way to assemble the whole machine, but plenty of pieces work in partial combo. Just Archmage, Portal, and one of the Walls will draw extra cards each turn, and the cheap artifacts you draw will lead to more draws. Metalworker plus Alchemist could yield sick amounts of mana (which we'll put to better(?) use in the next deck). Various random victory conditions pepper the deck in case you generate tons of mana (Stroke of Genius), draw your whole deck (Seismic Assault), or land somewhere in the middle (Latulla, Keldon Overseer).

The mana-generating capacity of Metalworker and Aphetto Alchemist is too terrific to ignore, so the duo is in my next deck as well. This deck focuses on the general mana-generating capacity of artifacts as a whole, though. Here, I try to replicate the feel of old-school Enchantress decks (you know, the ones that used—ha!—Verduaran Enchantress) by playing out mana sources that let you both draw cards (via the Archmage) and provide the means for playing them. But instead of using Fertile Ground, this deck uses Grim Monolith. It also uses Helm of Awakening, which can send some of your artifact costs all the way down to nothing. At that point, this almost takes on a Fluctuator deck feel, as you play a card for free to draw another one. The difference is that with this deck, those cards drop down into play.

As this engine has the potential, I'm sure, to get speedy and deadly, it's only right to use a patently absurd victory condition: Magma Mine. Hey, you're producing tons of mana, right? Magma Mine only needs 80 mana to win the game! Plus, as a 1-mana artifact, it's great for Archmage purposes. Sure, there are better ways to win the game. Much better ways. But since these decks are merely for demonstration purposes (Mirrodin provides plenty of other compelling uses for the Archmage, and even includes upgrades of some cards used in these decks—but I can't tell you which), why not be silly? BOOM!

Until next week, have fun with Archmage combos.