Brian Schneider is a well liked and respected player who has been away from Magic for a while. He takes he game less seriously these days, but is still definitely a force to be reckoned with. David Price has also been having a quiet period of late, he was the winner of Pro Tour LA back in 1998. 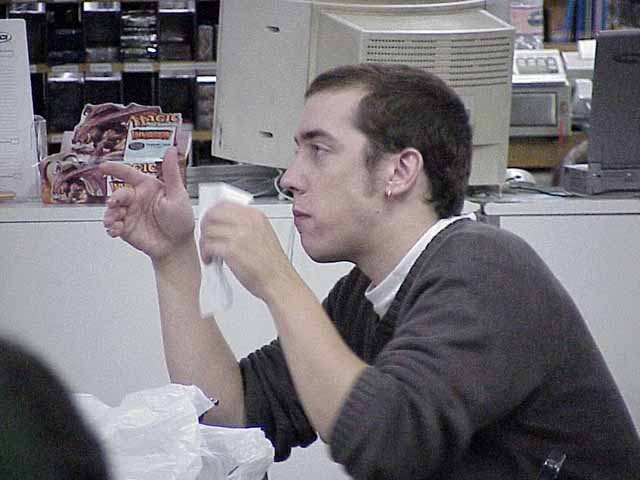 David was going with his old favorite of Sligh. It seems that apart from a period where he played mono-black Hatred, he has used this deck nearly all the time for the last four years. He didn't have such a good match-up in this round, though, against Brian's mono-green deck. This deck uses Natural Order to fetch large creatures such as Verdant Force, and controls the game with Plow Unders and Deranged Hermits.

Dave went first and got a good, typical Sligh draw, with a first turn Jackal Pup, and a second turn Mogg Fanatic and Cursed Scroll. Unfortunately for David, Brian's draw was better. A Wall of Roots is difficult for Sligh to deal with, and with a little help from a Natural Order, it metamorphosed into a Verdant Force. David tried to use burn spells to race the Force, but it's a hopeless task as the Force turned out two 1/1 tokens every turn. Brian was on a fairly safe seven life when the Force finishes the game.

David shook his head while looking through his sideboard; all he could do is take out his Price of Progress and add in Bottle Gnomes. He obviously hadn't prepared for this match when he was building his board. Brian had further copies of useful things such as Masticore, and Spike Feeders.

David's draw was a lot better going into game two. He played a Mogg Fanatic and a Goblin Cadet. A Shock dealt with Brian's only early blocker, a Quirion Ranger, and it looked very good for Dave when he drew a Ball Lightning to bring Brian down to 10. A Masticore was not enough, as David had a Hammer of Bogarden and another Mogg Fanatic. With no creatures on the table and facing a pair of Goblin Cadets and a Jackal Pup, Mike was forced to concede on turn five.

Brian had plenty of useful spells in the final game, but nowhere near enough land to play with. David controlled the board with an Incinerate and a Bottle Gnomes, which held off a Quirion Ranger. Brian always needed just one more land to cast a Natural Order, but wahe is still unable to draw it as David cast more Bottle Gnomes, a Jackal Pup and a Cursed Scroll. By the time Brian was able to find a blocker, David had him down to twelve. He activated his Cursed Scroll, naming a Fireblast. As Brian went to pick a card, David flipped his hand over - both of his cards were Fireblasts. Cursed Scrolling Brian in his upkeep and sacrificing four mountains to cast both blasts brought Brian down to exactly zero life.

Brian can think himself a little unlucky to have lost this match; usually it's one of the better decks for him to play against. But David's draws were above average in all three games, and in game three Brian just never got enough mana.

David Price beat Brian Schneider 2-1 and advanced to the round of 32.