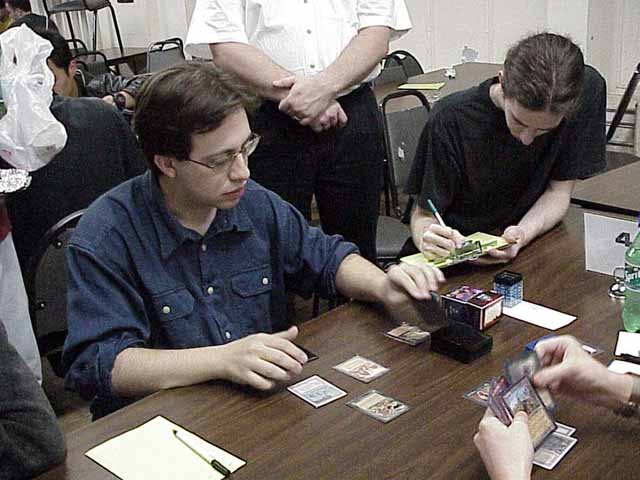 The Gateway tournament was down to the Top 4 players and this feature match saw England's Tony Dobson playing against Chris Senhouse of the USA. Tony had only missed out on automatic qualification for the Masters Series on Pro Tour Points, so he was looking to sneak in through the back door here.

Tony had a Stasis deck, which quite a few people have played in this gateway tournament. It aims to keep Stasis in play indefinitely with Gush, Thwart, and Daze to return Islands to his hand and play them over again. Chris's deck, Counter-Sliver, was less common today, but having played it more than anyone, he feels comfortable with it and plays it better than anyone.

The pressure was on as the situation was that the winner got a berth into the Masters series and a shot at the $25,000 dollar first prize, while the loser went home with nothing.

Having won the die roll, Chris went first but was forced to mulligan a weak opening hand. His second was better and he got a good start, summoning a Muscle Sliver, a Hibernation Sliver, and a Crystalline Sliver, while Tony could play only land. Tony's life got dangerously low as his attempts to slow the game ware neutralized, a Stasis getting countered and a Powder Keg getting disenchanted. Tony's deck can get out of most situations though, and a second Stasis resolved, halting the Slivers' attack. 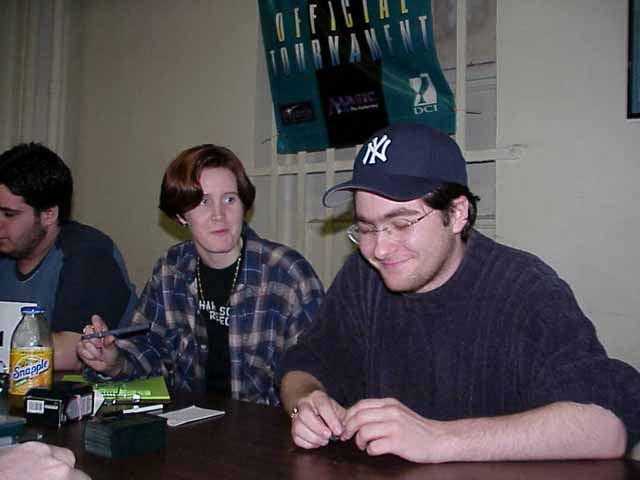 Both players built up thir mana bases, but this was a good position for Tony to be in so Chris attempted to force the issue with a Demonic Consultation. This backfired - the Consult removed almost two thirds of his deck, and the Acidic Sliver which he fetched was Thwarted, allowing Tony to keep the Stasis for at least three more turns.

Again Chris looked for an active solution, using his Hibernation Sliver to return another Sliver so that it could return to the table untapped. Tony wasn't going to let this game go though; he Thwarted the Hibernation Sliver and Boomeranged another one on the next turn. This reduced him to only two untapped lands, and if he couldn't find some more, he would have to let the Stasis go, allowing Chris to untap fully and finish him off.

Tony now found an unusual use for one of the more unusual cards in his deck, Thwarting his own Spellbook! This gave him plenty of lands to lay, and as he drew a Gush the next turn, he was able to keep the Stasis until Chris ran out of cards. The last throw of the dice saw an Acidic Sliver meet a Force of Will, and Chris conceded with only three cards left in his library.

The players sideboarded rapidly and headed on to game two; with only an hour for the round, Chris needed to keep the tempo up. Tony brought in four Back to Basics, which are fantastic in this matchup, since all of Chris' lands are non-basic, and none of Tony's are. Chris brought in a few reaction cards such as countermagic, particularly Pyroblast, and enchantment removal.

Game two started off as a re-run of the first, with Chris bringing out a pair of Hibernation Slivers. This time, Tony didn't need to go so low on life, as he had both a Back to Basics and a Stasis. With Stasis in play, the only thing either player did was lay land on his turn. Inevitably, Chris ran out of land first, and was forced to discard. As in the first game, Tony used Gush to be able to lay an Island each turn. As he would have eventually run out of Islands, Tony played a Claws of Gix, which allowed him to sacrifice his Stasis at the end of one of Chris' turns, and hopefully play another one.

Tony had another Stasis to play out when he sacrifices the first one, and Chris conceded immediately after casting a Duress. He saw that Tony had two Counterspells, two Force of Wills, a Thwart, a Daze, and a Morphling. Chris had only one Pyroblast and one Force of Will, not nearly enough to break through Tony's defenses.

Chris was a little unlucky to lose two-nil here; the match-up had been pretty even in practice. Tony always seemed to be able to maintain his Stasis in play by drawing Gushes and Thwarts at the right time, and Chris didn't draw nearly enough disruption.