Although both players were playing decks designed to abuse Survival of the Fittest and Squee, they were actually very different in their design. David's deck was a more traditional Survival deck using all five colors and and Survival and Recurring Nightmare to find answers to whatever threats his opponent played. Franck's deck was a Green/Blue/White deck and has a good number of Counterspells in addition to Armageddons and Opposition to disrupt his opponents mana supply. The result of this match would depend on who was able to keep Survival of the Fittest on the table.

David played first and kept a one hand land, since it had Quirion Ranger and Wall of Roots. He didn't draw a land on turn two but was able to play the Wall using the Ranger. A third turn Survival from David was met with a Force of Will from Franck, while Franck was able to get his own Survival out uncontested. Over the next couple of turns Franck used the Survival with the two Squees in his deck to find a whole host of creatures including Merfolk Looter, Quirion Ranger and even a Gilded Drake to steal a Masticore that David had played. David was able to Duress an Armageddon but Franck continued his abuse of Survival of the Fittest as he got an active Traewind Rider in play which he was able to use along with the Gilded Drake to start stealing David's creatures. Franck followed this with an Opposition and David found himself locked up everyway possible. With no way out, he conceded game one. 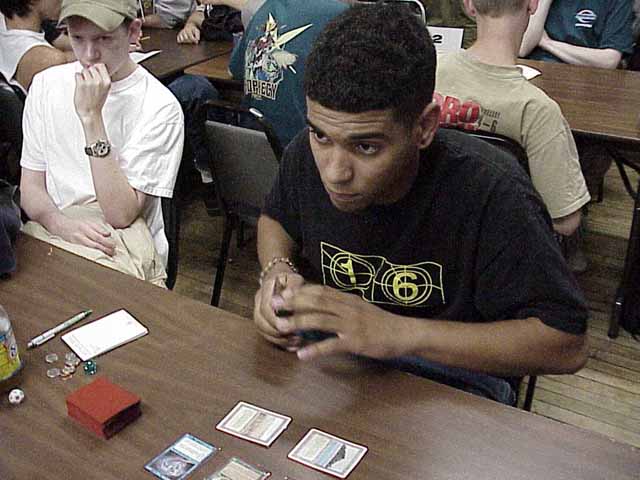 Franck started game two in a similar fashion with a second turn Survival. When he used it to fetch a Squee, David was able to cast Allay to destroy it and hopefully prevent Franck from searching for anything more significant. David hadn't drawn a Survival and was was only able to bring out a Wood Elves and a Quirion Ranger. Franck meanwhile showed Dave a second Survival and this time, David had no answer. Franck swiftly used the Survival to bring out a Priest of Titania and a Tradewind Rider, and the following turn a Sliver Queen. David, needing answers fast, managed to rip a Survival of his own from the top of his deck while Frank was tapped out, but Franck showd that he was definitely in charge of this match as he was able to counter David's Survival with a Force of Will. With no answers to either the Tradewind or the Sliver Queen, David conceded the match and Franck Canu advanced to the Master Series.