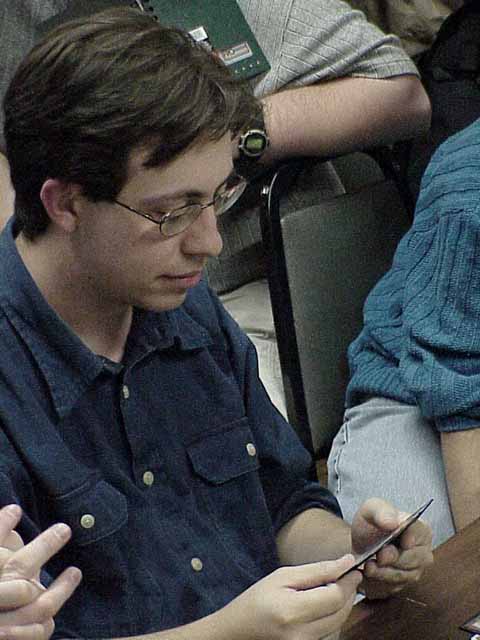 Chris Senhouse, editor-in-chief of The Dojo, faced off in the Top 8 of the first Masters Gateway tournament against Craig Wescoe, known for building Brian Davis' runner-up deck for Pro Tour Chicago.

Chris won the roll and elected to go first. He lost his advantage, forced to mulligan. He opened strong with a City of Brass and Duress, robbing Craig of the Recurring Nightmare in his opening hand. Chris played a turn-two Muscle Sliver, which Craig countered by playing a turn-two Wall of Roots. Chris doubled up his Muscle Sliver on turn three, and Craig found a second Wall of Roots to even the sides. Craig then played a Deranged Hermit on turn four. Chris cast an Acidic Sliver, then Duressed again on turn six, taking a Duress from Craig. Craig played a Krovikan Horror, which Chris sent packing with Swords to Plowshares. Chris played a Winged Sliver, and swung for seven, knocking Craig to 13. Craig played a Birds of Paradise and attempted to cast Academy Rector, which Chris countered with Force of Will. Chris came in the next turn for 12, and Craig was forced to block with his Birds, going down to 5. Craig attacked on his turn for 9 with the Hermit and Squirrel tokens, but had no answer, and scooped.

Craig elected to play first, starting with a Tropical Island. Craig again Duressed on turn one, taking Survival of the Fittest. Craig cast a Wall of Roots, and Chris responded with a Hibernation Sliver. Craig cast Academy Rector, which stayed this game, and Chris cast a second Hibernation Sliver. Chris Consulted for a Winged Sliver at the end of Craig's next turn, churning away almost half his deck, including all four of his Counterspells. Chris cast the Winged Sliver and attacked for four, taking Craig to 16. Craig attempted to play Tradewind Rider, but Chris countered it, bouncing a Hibernation Sliver to his hand to pay the alternate cost for Force of Will. Chris attacked again for two, taking Craig to 14. Craig played Krovikan Horror, and Chris responded by sending Craig's Rector farming with Swords to Plowshares. Chris finally found Green mana with a City of Brass and played Muscle Sliver, to which Craig responded by saccing his Horror to kill the Winged Sliver. Chris attacked again, for three, taking Craig to 11. Craig cast Recuring Nightmare and Squee, and brought back his Tradewind Rider. Chris attacked again on his turn for seven, forcing Craig to block with his Tradewind; Chris sacrificed a Hibernation Sliver using Acidic Sliver's ability to do the last damage to kill the Tradewind, and still hit for four. Chris replayed his Krovikan Horror, but had no answer, and scoops.