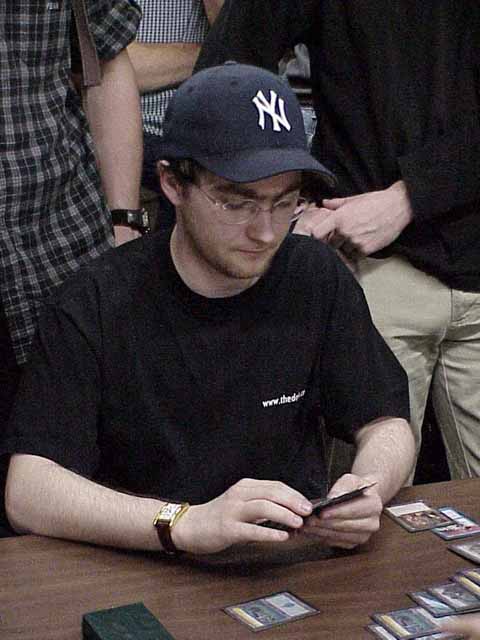 Tony won the roll to play first but was forced to mulligan his opening hand as it contained no lands at all. He kept his six-card hand but missed his land drop on his second turn. Noah, meanwhile, started with a Wall of Roots and an Elvish Lyrist which was a very key card in this matchup. Tony found a land on his third turn and Noah started to apply the pressure by attacking with the Lyrist and making a Masticore. Tony drew another Island and played a Stasis and a Claws of Gix while the Lyrist was tapped hoping that he could stem the attack for a few turns and perhaps force Noah to let his Masticore die.

This decision proved to look better and better for Dobson as he continued to draw nothing but Islands over the next five turns while Noah had to let his Masticore die and sit there wishing he hadn't attacked with the Lyrist. Noah tried to apply some pressure using a Rofellos to summon a Deranged Hermit and a Gaea's Cradle to try for a Stampeding Wildebeest. The Hermit's Squirrels were dealt with by a Powder Keg and the Wildebeest was met with a Counterspell as Tony stabilized his position. Tony played a Gush to keep the Stasis going and soon after sacrificed the first Stasis to his Claws allowing him to untap and play a second.

Noah was able to force a Survival of the Fittest through Tony's Counterspells but with most of his lands tapped, he was unable to take full advantage of it. He fetched two more Lyrists over subsequent turns in an effort to deal with the Stasis but the first was met with a Force of Will, and the second with a Counterspell. At this stage Noah was fast running out of answers as Tony's position got stronger with each turn.

Tony eventually dropped a Morphling, which is able to untap itself and repeatedly attack despite the Stasis lock. A couple of attacks later, Noah conceded the first game.

In the second game, Tony's Counterspells come in useful early on. A Stormbind from Noah was met with an Annul, and there was a brief fight over a fifth turn Ancient Hydra which Tony won with a Counterspell and a Force of Will for Noah's Pyroblast. Tony decided to go aggressive and summons a Masticore to his side. Unknown to Noah, Tony had sideboarded out most of his Stasis lock and brought in more creatures (including four Masticores) effectively changing his deck into a Draw-Go deck.

Noah was laking serious threats and the Masticore on the other side of the table quickly cleared the board of Elves and Birds of Paradise in addition to dealing with a Deranged Hermit of Noah's. Tony was forced to counter a Stormbind and after a few turns, due in part to the Mastcore's upkeep, he found himself with only one card in his hand. At this point, Noah made the strange play of casting a main phase Boil in an attempt to take out all of Tony's lands. Tony responded by playing the lone card in his hand - a Gush. He saved two of his islands and drew an additional two cards. Had Noah waited until Tony's upkeep, Tony may have decided to discard the Gush in order to keep all his lands in play and increase the effectiveness of the Masticore. Had he done this, the Boil would have left Tony with no cards or lands.

Noah tried to fight back with a Spike Weaver and by using Squee to block, but the two lands Tony was able to save meant that he was able to shoot down most of the blockers Noah summoned. The Weaver soon ran out of Counters and Noah found no answer to the Masticore which finally attacked for the final damage necessary to win Tony the game and the match.