the past couple of weeks, the Kamigawa Block Constructed PTQs have been dominated by one card: Umezawa's Jitte.

At Pro Tour Philadelphia, Jitte was considered the glue that held the format together, the sole weapon that allowed beatdown decks to hang with the powerful long games of the ubiquitous polychromatic green strategies, power decks all armed with card advantage engines and consistent mana acceleration, ranging from Legendary Snakes to Sway of the Stars. Since the Pro Tour, Jitte has risen from merely popular limiting factor to the defining card of the format. Aggressive decks -- primarily White Weenie and Black Hand -- have headlined the leading tables; just look at last week's Top 8 tallies and Blue Envelope counts. Even the nominally controlling decks, such as TOGIT-style Three-color Control or certain defense-oriented versions of Black Hand have given Jitte a nod. Certainly attaching the format's leading Equipment to an Orochi Sustainer can give late game life to a card that might not otherwise be valuable after an extended bout of attrition, but in certain Kagemaro-sporting Black Hand decks, the Jitte played Unforge in the absence of Terashi's Grasp as often as it was used as a threat card. 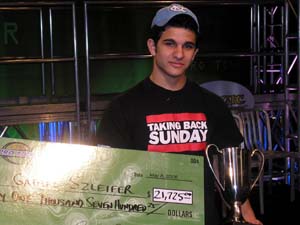 At the same time, the top archetype of the Pro Tour, the one that put more players into the Top 8 than any other, the mirror match that decided whether the relentless Japanese tide would continue unabated in the City of Brotherly Love or if a young American could truly Take Back Sunday, was heard from almost not at all on the qualifier circuit. Sure, Gifts Ungiven showed up in a deck list or two, but it was a minor blip on the radar, nowhere near the position we might have expected post-Philadelphia. New reanimation strategies came and went with little fanfare, and the more dramatic appearance may have in fact been Gifts Ungiven's presence in a new Mono-Blue Control archetype. After Grand Prix Minneapolis, though, the shame bowing the head of the Philadelphia champion lifted, and the world -- or at least the Kamigawa Block metagame -- changed once again.

3 Kagemaro, First to Suffer 1 Meloku the Clouded Mirror 1 Exile into Darkness 2 Kodama of the North Tree

3 Kagemaro, First to Suffer 1 Exile into Darkness 1 Kodama of the North Tree 1 Meloku the Clouded Mirror

The decks are remarkably similar, with Mark's having a basic Plains -- and fourth color -- where Lieberman sticks with a ninth Swamp (and three colors). Just as a second main deck Wear Away in Philadelphia allowed Mark to advance past the resurgent Kai Budde on his way to Top 8, this small main deck deviation (and the inclusion of the Ethereal Haze it fuels over an additional threat card) gives the Herberholz deck a measure of flexibility missing in certain other builds.

The presence of voluminous library manipulation and both spot and mass removal give Gifts Ungiven effective control elements that can be used to dig it out of many different situations. What makes the deck special is that, should it reach a critical point of mana development, Gifts Ungiven has the ability to present a recursive threat or answer mechanism by combining its namesake instant with Hana Kami and repeated Arcane Splice combinations. Its resilience in the early game, including the ability to block with Sakura-Tribe Elders (to soak up damage and keep counters off of Jittes) and ample creature removal allow Gifts Ungiven to fight the beatdown long enough to get to that point. Afterwards, its array of varied five- and six-drop Legendary threats can pick up the pieces of an opponent's shattered board.

Although there are several different specific card combinations, the most iconic for the current configuration of this style of deck is to play Gifts Ungiven for:

If left unmolested, any two of these cards will allow the deck to create an infinite "Fog" effect, locking any beatdown player out of the ability to deal creature damage for an indefinite term. For example, say the opponent allows you to have Soulless Revival and Hana Kami. Assuming you were able to untap all your lands and bury your dead creatures per normal, you might:

Saviors of Kamigawa gives the core Gifts engine a potentially stronger recursive weapon in Kagemaro, First to Suffer. With Kagemaro in the mix, rather than playing for infinite Fog, the Gifts player can lock the opponent out with infinite Mutilate. Say you Gifts for Goryo's Vengeance, Kagemaro, Soulless Revival, and Hana Kami. What should the beatdown opponent give you? If he gives you two creature spells, it is potentially difficult for you to set up an infinite recursion (you have to draw a backup Arcane spell)... but the deck has more than 20 Arcane spells between deck and sideboard, so this may not be a great bet. Worse, you might just untap and play Kagemaro while the opponent doesn't have a backup spell.

The advantage of the Kagemaro setup over Ethereal Haze is that it allows you to avoid the problems posed by Hokori, Dust Drinker, and with multiple copies of Kagemaro in the deck, gives you an option to exhaust the mischief represented by Samurai of the Pale Curtain. Note that Goryo's Vengeance will not itself remove Kagemaro from the game because Kagemaro's plan is to sacrifice itself to Mutilate the board; the "at end of turn" condition of Goryo's Vengeance should not therefore typically be fulfilled.

The presence of Kagemaro makes the mana in the deck slightly more consistent, with the

Final Judgment being replaced by the versatile Maro. In addition, the consistency of huge Black threats at Philadelphia was echoed time and again by top Gifts players for the simple reason that they could pitch their Ink-Eyes and Kokushos -- but not absent Melokus -- to Sickening Shoal.

Those with lots of mana can go instead for Death Denied, Kagemaro, Soulless Revival, and Hana Kami. The advantage of this combination is that with Death Denied, you don't necessarily fall back a card like you might with the one-for-one Goryo's Vengeance as Death Denied is itself at least a two-for-one for purposes of setting up infinite recursion; the disadvantage is that it takes a tremendous amount of mana to operate. With Goryo's Vengeance, your Kagemaro has no additional cost... You just need a Swamp open to fire off his Mutilate ability. With Death Denied, if the opponent gives you two reanimation spells for instance, you need to have four mana for the Death Denied itself and six for the Kagemaro and an activation (though not necessarily at the same time), and that doesn't even begin to talk about the additional mana requirements for Splicing out Hana Kami recursion over the long haul. The point is, the Death Denied setup, while more infallible given a lot of resources, is weaker under pressure.

Saviors of Kamigawa also gave all three Minneapolis Top 8 Gifts Ungiven players a new defensive tool in Exile into Darkness. The unassuming sorcery is expensive, but remember that between Gifts Ungiven the card and all that Splicing, the Gifts player's hand should be larger than the typical aggressive player's. Where a control player wants to draw cards, the beatdown is usually designed to drop its grip early for purposes of swarm. In the late turns of the game, when a White Weenie or Black Hand player is trying to find threats on the top of his deck, Exile into Darkness shines, eliminating each topdecked Eight-and-a-Half-Tails, Takenuma Bleeder, or Ogre Marauder without differentiation... but extreme prejudice.

These same anti-creature strategies are equally useful against less extreme creature decks as well. The only thing standing between a TOGIT-style Three-color Control deck and Hana Kami recursion is a 2/2 body for four mana and maybe a couple of sideboard counters. Much slower on offense than White Weenie, the TOGIT deck has a very rough time with Gifts Ungiven's unfettered might. A deck like the Fujita Legendary Paddle build from Philadelphia isn't going to be busting out of Ethereal Haze lock easily, either... That's why Tsuyoshi and his squad had Mindblaze in the board.

The other main disruption card is Myojin of Night's Reach. Twice the mana of Cranial Extraction, Myojin of Night's Reach is typically too slow against beatdown... but also arguably more potent, if not truly devastating, against another slow deck. Rather than taking one card that might not be in the opponent's deck, let alone hand, the eight mana 5/2 can sweep the opponent's entire grip, generating a huge advantage going into the late turns. With all the Sickening Shoals and Hideous Laughters cleared, all the recursion itself in the graveyard where it can't set up Kagemaro defense, even the generally inoffensive Gifts Ungiven player can go aggro with his Hana Kami, Sakura-Tribe Elders, and larger creatures. Myojin of Night's Reach shines brightest when removing its counter on the opponent's draw step, just to get that extra card.

Sideboarded mirror matches deviate from the core strategies greatly. Though disruption is king in game one, subsequent games make a wide variety of threats relevant. Don't be surprised to see two-drop Rats on the other side of the board during the early turns. Nezumi Shortfang combines a relevant disruptive effect with a potentially devastating 3/3 body and Rack-reminiscent special ability. Nezumi Graverobber combines a 2/1 beater's best practices front end with long game card advantage. The gold standard, though, has got to be Kodama of the North Tree. Extremely resilient, with power greater than its mana cost, Kodama of the North Tree is a serious threat that shrugs off Cranial Extraction directed at some other element of the deck... and was instrumental in Lieberman's actual victory over Herberholz in the Minneapolis Finals.

Wipe that grin off your face, Umezawa's Jitte! Gifts Ungiven has returned to Decks to Beat status. Besides the three copies in the Grand Prix Top 8, both of Day One's undefeated players -- James Beltz and Eugine Levin -- were running decks similar to those discussed in this article. For those of you already tired of Umezawa's dominance over the current PTQs, look no further than the deck that is actually winning the biggest and most competitive tournaments in Kamigawa Block, the once and current champion.

Gifts Ungiven may have ruled the roost at this weekend's Grand Prix, but how did the rest of the metagame shape up at PTQs various? To find out, click here.