elcome back to the latest installment of Going Rogue, the column that doesn't just play to win—it likes to win in surprising new ways, turning some of the cards sat at the back of your binder straight from zero to hero at a local tournament near you.

Between the release of Shards of Alara and some fun times at Pro Tour–Berlin last month, there have been a lot of ideas buzzing around this rogue's head as to how best to attack my local FNM. Standard is the format, and while Faeries and Five-Colour Control are busy battling to rule the roost, there are plenty more options open to the wily, some of which are an awful lot of fun. 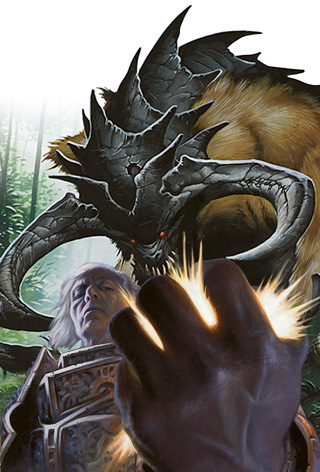 This month, I decided that I was going to try something a little crafty: the Transformer deck. One of the big benefits of playing decks that people aren't ready for is to toy with expectations, and end up with a more "powerful" deck simply due to the fact that your opponent might be making poor choices based on not having all the information they would like. Against control decks, this can be especially good. Everyone loves seeing the "wrong" spell get countered. However, there can be problems when people start noticing something strange going on. While the cat might not be out of the bag, your opponent at least realises that you are holding a bag with something wriggling in it.

Transformer decks are a shifty little answer to this. They are decks that, on the face of it, look like something unsurprising and straightforward. They have the potential to make the most of players going into auto-pilot. I'm sure that on the first day of Pro Tour–Berlin there were quite a few players who weren't duly wary of a turn-one Llanowar Elves start ....

There have been quite a few interesting decks running along those lines recently. Backlash is a rogue deck that is just beginning to get into the mainstream. Essentially it is a Kithkin deck, but with the power of Painter's Servant and Chaotic Backlash it can potentially take an innocuous looking board position and turn it into a tick in the "W" column in one fell swoop. Backlash has been made even better by the fact that regular Kithkin decks are now more likely to be packing a small burn package to get some extra finishing power, and deal with the omnipresent Stillmoon Cavalier from many sideboards.

Now many players have caught on about Kithkin's power in Standard, be they Chaotic or not, but the principal of getting opponents zigging when they should possibly be zagging remains an interesting one to toy with.

As a little example, here is a deck loosely based on the Jund deck that none other than Mike Flores rocked up to States with recently.

Tim Willoughby's Pretending to Be Flores

At first glance, this deck bears a passing fair resemblance to the Jund Mana Ramp deck of Flores's design. This is not a coincidence. Firstly, it is a good deck that seems well worth emulating. Its plan of using effective board sweepers, mana acceleration, and big threats is a good one. Where this build throws a spanner into some decks' works, though, is with Warp World. While Nucklavee is good with Firespout and Jund Charm, it gets very silly indeed when put into play by virtue of Warp World. This sorcery is one that is good in the format where you can offer comparatively little upside to various control decks and get a big payoff for yourself.

With Broodmate Dragon, Siege-Gang Commander, and Farhaven Elf all effectively netting you extra permanents, you can end up finishing ahead very easily, Those tokens do count when it comes to the World Warping, meaning that when your big red sorcery resolves, you can end up with even more scary permanents on the board.

The dream with this deck is to play Warp World, and hit sufficient lands and a Nucklavee to be able to cast it again. While there is a random factor in there, it is one that you should be better set up to work off, especially given the chances of your opponents seeing it coming.
In small part this deck is a reaction against the gradual rise of the planeswalkers in recent weeks in Standard. Do you know what doesn't get put into play off Warp World? That's right, Ajani and company. 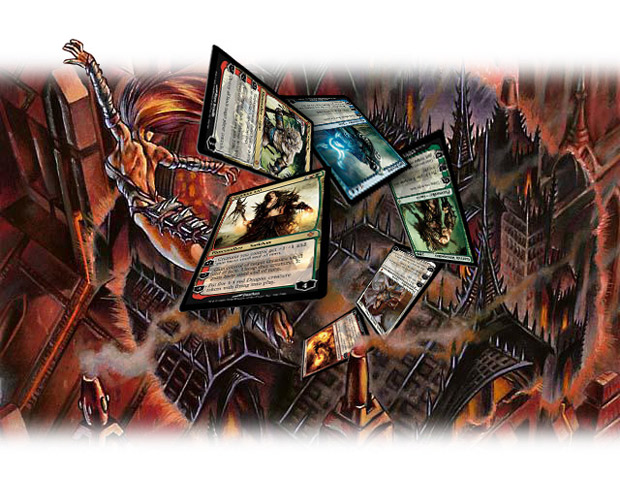 Now, if you wanted to build a more clearly rogue version of this deck, you might well go a completely different route. I've been messing around with the following list for some time now, and having a lot of fun with it. It is not something that many players are going to sit down expecting, but to be honest, I prefer my opponents being led up the wrong path than just confused.

This deck, while already a lot of fun, is definitely a work in progress. It has a few themes going on, each of which I enjoy, and the confusion around what it actually is is exactly what started me off on writing all about the Transformer decks (to which there is more than meets the eye) in the first place.

In the early game, it is very easy to look at this deck and consign it to being a Knight deck. There are definitely a lot of them, and that Wilt-Leaf Liege has proven to be a killer, especially given the comparatively high amount of discard in Standard right now. Where the waters get muddied a little is by that Springjack Shepherd. The goatherder plays very nice with all your knights, especially the liege, making a whole mass of tokens that can either get stuck in (with a little help from the Liege) or sit back and block. Things get really interesting with both Springjack Pasture and Warp World. The land means that generating the mana to go a little crazy is really not that tough, assuming a friendly goatherd or two. Warp World also has the potential to turn Goats into Knights—an altogether unexpected turn of events for all concerned.

This deck can also "go off" with Nucklavee much like the Jund build, and has even been able to play the Transformer role of late, with people seeing red-producing lands and fearing a Chaotic Backlash or two. The version I have at present runs this plan only in the sideboard, in order to keep opponents guessing.

For our next deck, I took our Transformers idea and went a little bit more literal. I am something of a fan of the Heralds from Shards of Alara, and so ever since I saw them I've been looking for a good way to get a monster or two into play at discounted rates. This deck was partially inspired by the impressive planeswalkers deck from Pro Tour–Berlin, which showcased the generally forgotten Rings of Brighthearth as a way of making those heralds work a lot harder.

This deck has a multitude of lines of attack. Firstly, it can go with the creature plan, supported by an aggressive curve of low-cost creatures, who play very nice with Ranger of Eos by being surprisingly scary for but a single mana. Antoine Ruel's Invitational card will frequently fetch up a Wild Nacatl or Figure of Destiny with which to harry the flanks of a hapless opponent. More excitingly, though, sometimes it will fetch up Behemoth's Herald, which can in turn get your big fella when you need him. 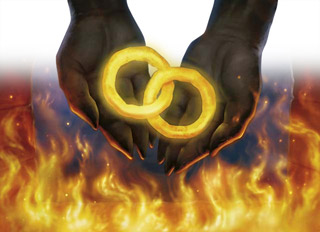 The other plan of the deck is to utilise powerful planeswalker abilities to the maximum. Sarkhan Vol really shines here. Haste obviously works well with both Behemoth's Herald and the Godsire that can be fetched with it (although not both in a turn), to make sure that the monster gets at least one crack at spawning replicas. The "Threaten" ability also gets a little scarier when it steals a creature that will then get sacrificed for fun and profit. Garruk Wildspeaker can both accelerate into a "natural" Godsire and grant trample using his ultimate ability in order to make the monster lethal virtually immediately.

I have yet to actually have Rings of Brighthearth in play when I activate Behemoth's Herald, and actually be able to enjoy the after-effects, as it tends to result in some scooping on the other side of the board. To be honest, it is about as silly when paired up with planeswalkers. One way or another, there are enough activated abilities in this deck to make the Rings a solid inclusion if you are looking for a little fun.

Finally, we have a little recap on an idea I mentioned in a previous article that came to spectacular fruition thanks to Shards of Alara. When talking about Eventide, I got possibly a little too excited about the potential to do naughty things with Cold-Eyed Selkie and Cephalid Constable, really punishing opponents for not blocking. Well, that idea really gained momentum when Bant came along to lend a hand, led by Rafiq of the Many and Elspeth, Knight-Errant.

Scott Johns showed up to gunsling at Pro Tour–Berlin with a truly vicious Standard deck (designed by R&D veteran Mons Johnson) that used both Rafiq and Elspeth to deadly effect alongside various "saboteurs." Being able to play turn-one Birds of Paradise, turn-two Cephalid Constable, and turn-three Rafiq of the Many, then swing and bounce four permanents will cause scoops all over the place. If ever there were "big plays" to be had, Scott's deck seemed to have them. Chameleon Colossus plus Rafiq led to a few crazy situations of "one pump, you're dead," with double strike, exalted, and power doubling all working together to finish games fast. Elspeth proved no slouch either, also allowing for big attacks that would be hard to deal with. Interestingly, this deck is one set up to be more aggressive with Cryptic Command than most, tapping down creatures to clear a path for swings as often as it counters spells and draws cards.

For those of you undaunted by a deck rarer than most (two-thirds rare by my count, including mythic rares), here’s the full list, which I have dubbed "One Swing." To be honest this deck only really needs to get one big hit in to get a long way ahead in the game.

4 Rafiq of the Many 4 Cold-Eyed Selkie 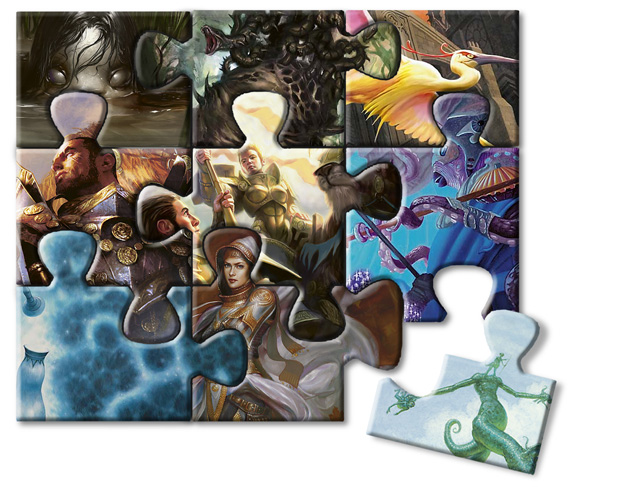 Scott's deck showed a great reason to keep those little ideas in your head. Sometimes the cards you need to turn your good deck into a great one are just a set around the corner. If you've put in a lot of the work on the deck already, then that final piece of the puzzle should put you well ahead of the game.