an old kithkin alchemist what to do about faeries, and her first recommendation would be, "Just stay away from them. Their games only lead to trouble." If you prodded her for more practical remedies, she might recommend an elixir concocted of thyme and bitterblossom petals, the scent of which on your breath might distract them from their mischief for long enough for you to divert their tricks to someone else. But her ultimate suggestion would be this:

"Shackle your dreams—lock them tight in your head with all the determination you can muster—for the fae are jealous of them, and whisk them away like thieves for their master."

The creative team felt it was important for the set to have the faerie tribe feel mischievous. Fairy folklore is full of tales of their tricks and dances at the expense of hapless mortals, and of superstitions and herbal remedies to combat their crafty ways.

But how do you make a Magic card mischievous? How do you make a Faerie creature feel like it's playing tricks? Well, there are plenty of ways, especially in the Lorwyn Faerie tribe colors of black and blue.

Problem is, in a lot of cases Magic cards that simply "mess with your stuff" don't do that much to help you win the game, at least not as an entire strategy. For example, during Lorwyn design, the red-black boggart (Goblin) tribe was going to have "mess with your opponent's plans" as its mechanical theme. The Lorwyn development team, led by current Magic Lead Developer Devin Low, later pushed the boggart tribe into a "benefit from dying, and raise dead" theme, which worked far better in terms of gameplay than "mess with your plans" while still steering clear of the brutal aggro speed of some earlier sets' Goblins (read Devin's story of this change here).

But we in Creative still wanted mischief. Lorwyn's tone is lighter, more friendly, less murderous than other settings'. You won't find spells here that eviscerate creatures' abdominal cavities or that turn them into flesh-sloughing zombies (I'm not saying there's not a place for that, because there absolutely is—just not here). Here the spells pull pranks while sylvan creatures point and laugh. Happily, although that flavor didn't work out as we thought it might for boggarts, the Faerie tribe succeed dramatically at this mischievous feel in Lorwyn (and, as you'll soon see, in Morningtide). The color blue is already pretty well-suited to the kinds of "Magic tricks" I listed above, and a tribe full of flying flash creatures does a good job of feeling "tricky" while still actually winning the game. 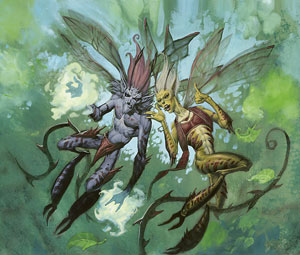 The Vendilion clique is a trio of faeries: Veesa (female), Endry (male, the twin brother of Veesa), and Iliona (the largest and often bossiest of the three)—the name "Vendilion" comes from a combination of their three names. Like all faeries, they purport to work for Oona, the Queen of the Fae (who, according to legend, lurks behind layers of deception and glamer in a valley called Glen Elendra). The one thing Oona would need, as a powerful being who never ventures from her magical vale, is spies—and that's where the Vendilion clique come in. They serve as Oona's eyes and ears in Lorwyn at large, keeping tabs on certain elves, flamekin, and treefolk as needed, so that Oona's plans—whatever they are—will not be interrupted when the time comes.

These faeries' current assignment is to watch over Maralen, a willful elf who has become part of Rhys's quest to fulfill the plans of the old treefolk Colfenor. Veesa, Endry and Iliona are no friends to Maralen, but they have been charged with following her commands to the letter—a classic formula for both comedy and drama. If you'd like to read more about these characters, don't hesitate to check out the Morningtide novel by Cory Herndon and Scott McGough, and get the whole story.

When it came time to make a legendary creature card of the Vendilion clique, Creative's role was pretty narrow. We just repeated over and over again, "They're magical spies. They're mischievous." A lot of design candidates were proposed and rejected, usually for being too annoying. As it turns out, being the eyes and ears of Oona is difficult to translate into mechanics while still making an interesting, powerful Magic card. And since the card was to represent all three of these faeries, each important characters to the novel in their own right, I was personally hoping that the card would reflect their "threedom" somehow.

I'm excited about the final design. I think it nailed all of our flavor goals nicely. Click .

The Vendilion Clique—Mechanics and Flavor

Vendilion Clique is a powerful card that centers on its three properties (yay), given that flying is a freebie:

Flash combined with 3 power gives them a powerful way to remove an attacker via blocking and trading, sort of like a blue Neck Snap. That fits perfectly into the Faerie tribal strategy of sitting there with mana open, waiting for your opponent to do something dumb to you like attack, and then punishing them for it. The Clique's evasive 3 power for three mana (another three—yay) also makes them a formidable threat, with an option for pseudo-haste if you cast them at the end of your opponent's turn.

The Clique's final ability is what sets them apart from other Faeries. When they come into play, you get to use the Clique as your eyes and ears, allowing you to spy on your opponent's secret plans.

And you get to mess with them.

I'm very fond of how mischievous this ability feels. It doesn't just straight-up Coercion your opponent. It doesn't Meddling Mage him, locking out a spell from his hand. In fact, the Clique gives your opponent the chance to draw into something better than what he had before, or even another copy of that same troublesome spell you selected. But most of the time, it'll give him something way worse than what he had squirreled away. The Vendilion Clique are likely to reach into your opponent's mind, find his most treasured thought, and touch it with faerie mischief, turning it into either harmless memories of a location (a land) or a vision more pleasant to you (some less innocuous spell).

Heck, the Clique can do this during combat, right before they engage your opponent's minion in a battle to the death. Kill an attacker and lessen your enemy's in-hand card quality on their way out? Great. Lessen your enemy's in-hand card quality and prepare a 3-point strike on the following turn out of nowhere like some kind of gossamer-winged guerrilla force? Perfect. Just fight with a 3-power evasion creature for a meager triplet of lands tapped, perhaps with the both protective and aggressive guidance of a Scion of Oona showing up just before damage, with a peek at the hand as the feather in your foxglove-shaped cap? Capital. Any mode works. All a bargain at three (yay) mana.

Wizards on the Wing 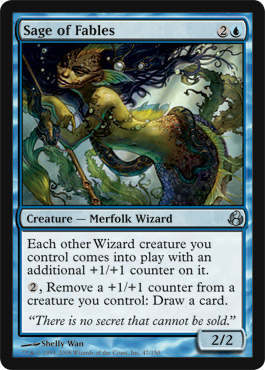 Besides all that, the Vendilion Clique are Wizards. Morningtide (he explained, as if you hadn't read Rosewater already) has a "class matters" tribal theme, so that little word on the type line suddenly matters in all new ways. And some powerful members of that tribe are welcome. Let me tell you, there was once a time when Wizards, as a tribe, were (and the humor is not lost on me here) pretty terrible. The Onslaught Block Wizard tribe was the victim of some serious neutering somewhere along the way, so with the exception of a Kai, a Patron Wizard, or an Arcanis the Omnipotent here and there, Wizards was a hard deck to make work. The tribe never had an evasive, instant-speed combat-wrecker like the Vendilion Clique, let alone a three-mana lord-slash-card-advantage-engine like Sage of Fables, or all the other tools that Morningtide brings.

What I'm suggesting to you now is that you give Wizards the benefit of the doubt for a moment. The tribe, I mean. In fact, if you see a Wizard, give him a hug. He is only trying to do the best work possible for you. Me, I mean.

That kind of went to a weird place. Moving on.

The point is, decks built around the Wizard subtype are about to be a force like they've never been before. There are over 100 Wizards in Standard right now (counting changelings and my good pal Mistform Ultimus), even before the Vendilion Clique and the rest of their spellslinging buddies show up and add to that number in Morningtide. There are Wizards across the rainbow of magical mana flavors, but even if you're only considering a deck composed solely of flying, blue Faerie Wizards, you've got a smorgasbord of options. 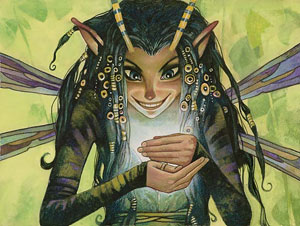 If you don't get your hands on a few Prerelease-traded or launch party-procured copies of the Vendilion Clique yourself, you should still be aware of their existence. Hide your spells away where they can't be meddled with. As the old kithkin alchemist warns, keep a tight hold on your dreams, for faeries skip from one ring of toadstools to another, whisking themselves to exactly where they're not wanted, drinking the dreams of anyone susceptible to sleep-dust and bringing what they learn like pollen to their hive queen. If you don't want Oona to know what songs dance through your head each "night" as the sun dips close to the horizon, you'd best keep thyme on your breath and playful bells of moonglove in your garden.