Wizards of the Coast is out of the office for the Thanksgiving holiday, and will return with new articles beginning Monday, 11/29. In case you missed it, what follows is the article that ran in this slot last week. In the meantime, we'll still be running new content in Card of the Day, Magic Arcana, and Ask Wizards.

Today is the day where Rules Developers duck for cover. I've printed off a copy of the Comprehensive Rules and spirited it away for safekeeping far from the fallout. Why all the fuss? Because today is Unhinged Release Events Day, and sanity is a distant memory. I'm going to hold out just a little longer, but fear not, Dr. Ev… I mean Mr. Rosewater (there's a reason Scott keeps our columns on opposite sides of the week.) will be fielding a few early Unhinged questions in his Monday column. Turns out even Fifty pages of FAQery was not enough for a set as crazy as Unhinged. In the meantime, here are two that are worth knowing going into this weekend's Release Events.

Back to Black-Bordered World

Visit to the Land Down Under 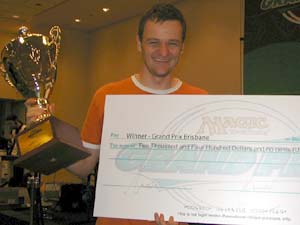 Here in Seattle, it rains. A lot. Well, it really just drizzles. But it drizzles a lot. So when I had the chance to head judge GP Brisbane in November, I started swimming early. After all, Australia in November is in their spring / summer.

Congrats to Brisbane's own Will Copeman on his GP victory. And now for a few bits and pieces that came up during the event.

That's all for this week. Next week we'll have follow up from the Unhinged release events.