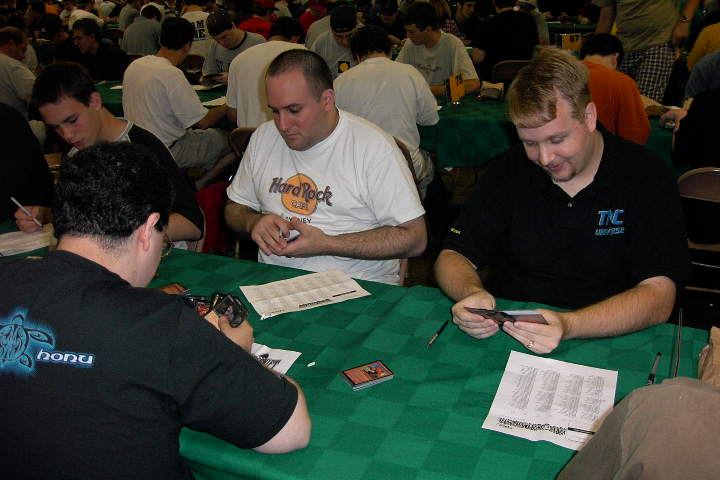 Friday evening at the Franklin County Veterans Memorial was amazing. The most heard phrases included "What are you doing here?" and "I didn't know you were coming!" Everyone is here had everyone had to walk over and shake everyone else's hand while they lined up practice drafts. Brian Hacker hasn't played a Magic tournament in over 6 months, but he turned up here trying to re-qualify for the Pro Tour with teammates Gab Tsang and Ben Rubin. Chris Pikula has already re-qualified for the Tour along with old school Deadguy teammates Dave Price and Tony Tsai. Nate Clarke hasn't made a Top 8 since Reagan was president, but that didn't stop him from showing up sporting a new dyed-blonde hairdo. Kurtis Hahn was at the center of a very loud group of 5-color players (or maybe it was just that Kurt is that loud) who seemed more interested in Jeweled Birds than practice drafts. Mike Long was spotted walking around the site on Friday and I for one will be very curious to see if he's here as a dealer or a player. Even Feming Chan and Mike Lucarello have returned from the dead.

It wasn't just old school players filling the tourney site - there's also an invasion force of Europeans. Perhaps they figured they could just hang out on our continent for the two weeks between Grand Prix Columbus and Worlds or perhaps they're tired of Americans flying over to their GPs and stealing their money so they've decided to return the favor. Whatever the motivation, probable Player of the Year Kai Budde is here and playing with fellow German Patrick Mello and Sigurd "the Big Viking" Eskeland. The Ruel brothers are also here, with Raphael Levy taking over the slot on Black Ops usually occupied by Florent Jeudon. Kamiel Corneleissen has also made the trip because he wants an opportunity to practice with his teammates for the upcoming team Pro Tour - Kyle Rose and Eric Froelich.

Last year, North American Magic players seemed singularly unimpressed by the idea of playing Magic as three-person teams and the attendance at QTs and GPs was underwhelming. This season, however, things have been totally different. Grand Prix trials have been drawing better than last year's qualifiers and this year's team QT round has been more popular (on a player per event basis) than any QT round since Paris! While the team Grand Prixs in Pittsburgh and St Louis each drew around 70 teams last year, no one is expecting less than a hundred for this one. My theory is that the low threshold necessary to qualify for the Pro Tour on DCI rating (1700) motivated a lot of people to play and then once they did, players began to really enjoy the team dynamic. Whatever the reason, they've all come to this Grand Prix for some good times, good comraderie, and one last chance to qualify for New York.

Other teams to keep an eye on:

Your Move Games (Darwin Kastle, Rob Dougherty, Dave Humpherys) - they won the previous team Pro Tour and only lost once in the most recent PT (though four draws sank their hopes for another win). They are always in the hunt.

Car Acrobatic Team (Aaron Forsythe, Andrew Cuneo, Andrew Johnson) - they were the only team to beat YMG in New York and they turned the trick again at the Tokyo Masters Series. Has the Pittsburgh playtesting braintrust broken another team format? Stay tuned - only time will tell. 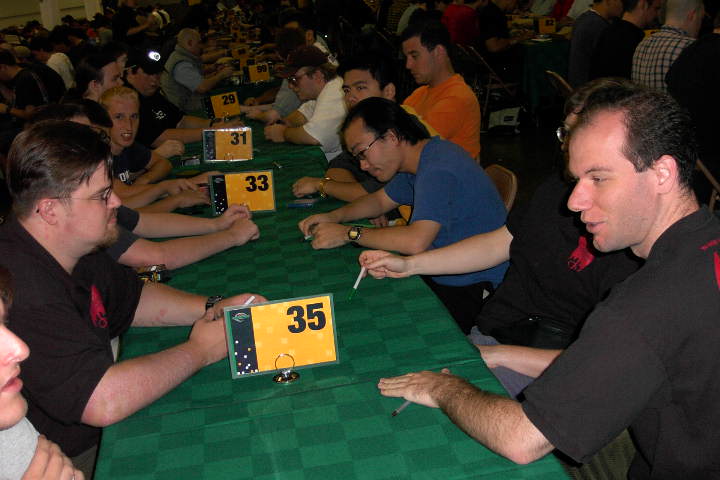 Antarctica (Jon Finkel, Steve OMS, Dan OMS) - The Grand Prix St Louis champs have some of the best talent the game has ever produced on their roster and you know they'll be in contention. They flew to GP Taipei last weekend and had a disappointing day 2 which they claim was just plain bad luck.

AlphaBetaUnlimited.com (Chris Benafel, Dave Williams, Bob Maher) - Team ABU has definitely been the talk of the Tour this season. In addition to their amazing individual performances, the original team (Benafel, Ryan Fuller, and Noah Boeken) ran the table at the Tokyo Masters Series. Then Boeken was replaced by Dave Williams and that team beat out 283 other teams to win Grand Prix Yokohama. Fuller was replaced by Dan Clegg for last weekend's Grand Prix Taipei and they won that too! For this event their lineup includes the reigning Player of the Year (and long-time teammate of Williams) Bob Maher. Chris Benafel told me Friday evening "if I was a betting man, I'd bet on us."

[Name to be announced] (William "Baby Huey" Jensen, Matt Linde, Brock Parker) - Jensen was already planning to play with his buddies Linde and Parker even before his teammate from last year - Casey McCarrel - was suspended by the DCI. Huey, Ben, and Casey won GP Pittsburgh last year and seemed in prime position to make a run at the most recent team PT until Casey overslept on Saturday and got them a match loss. Huey's new teammates include a GP champion (Parker won in Turin as a member of "Team Clegg") and a US National champion (Linde won in '98).