The format for Grand Prix—Kitakyuushuu is Lorwyn Limited (Sealed Deck + Booster Draft). All DCI™ Limited rules and Magic® Floor Rules and all subsequent updates will be enforced. For the latest edition of the DCI and Magic Floor Rules, please refer to the DCI Rules web site.

TOURNAMENT REGISTRATION AND PLAYER CONTACT
Registration will be held on site on Friday and Saturday morning.

The main tournament at Grand Prix—Kitakyuushuu is open to Magic players of all ages. 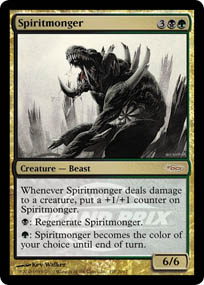 Tournament Divisions and Prizes
All participants of Grand Prix—Kitakyuushuu will receive a ¥200 discount coupon valid for any on-demand tournament, as well as a special Spiritmonger premium card.

The Top 16 players will receive invitations to Pro Tour—Kuala Lumpur, scheduled for February 15-17, 2008. In the event that a player who wins an invitation to a Pro Tour stop at a Grand Prix has already qualified for an invitation, the invitation does not pass down under any circumstances. Previous qualification may be through a Qualifier tournament, through performance at a professional tournament, or by being an invited DCI player (valid upon the date of the official rank announcement for the appropriate professional tournament).

Grand Prix—Kitakyuushuu will feature the standard "main tournament" prize schedule as well as a special "Amateur" prize schedule. The Amateur prized will be paid to the highest-finishing amateur players regardless of their standing in the Grand Prix. All prizes are in U.S. dollars.

Amateur Status
A player is considered to have amateur status if he or she has never participated in a Pro Tour, regardless of whether or not that player has any Pro Points. If a player has ever attended ANY Pro Tour or World Championship event, that player no longer has amateur status, may not participate in the Amateur Championship or Junior Super Series tournaments, and is not eligible for amateur awards at Grand Prix or other tournaments.

Pro Points
Grand Prix—Kitakyuushuu will award Pro Points based on the following schedule.

Tournament Byes (Byes are not cumulative throughout the season or year)
Byes will be given to players in the Grand Prix based on the following criteria:

Trials will be run in flights of 32 players throughout the day during the registration time given above. The winner of each 5-round single-elimination Trial will receive a Three-Round bye at the Grand Prix.

Additional trials will be held across Japan in the months before the Grand Prix, each awarding at least a Three-Round bye. For details, please see the Grand Prix—Kitakyuushuu Trial page.

The winner of the Qualifier tournament will receive an invitation and airfare to Pro Tour—Kuala Lumpur, scheduled for February 15-17, 2008. Booster packs will also be awarded to top finishers.

The Top 4 finishers will receive invites to The Finals 2007. Booster packs will also be awarded to top finishers.

The winner of the Apocalypse Legacy Tournament will receive a sealed box of Japanese edition Apocalypse.

PLAYER ACCOMMODATIONS
NOTE: The following hotels are not endorsed by or affiliated with Wizards of the Coast. The hotels on this list are taken from guidebooks and provided here for your convenience only.