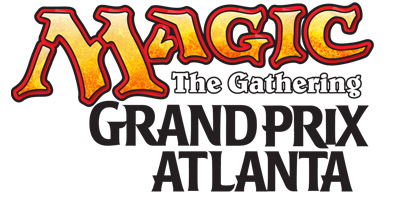 Atlanta, Georgia is a brave and beautiful city with an impressive legacy of leadership, progress and inspiration. What better place then to hold a Legacy format Grand Prix? What better time than the week of celebrating our independence?

Last year's Grand Prix in Atlanta broke a format attendance record. The questions are what new achievements and what new experiences will you and your friends be a part of creating this year in Atlanta? To start, we have added Friday Last-Chance Grand Prix Trials in different formats to include Standard and Sealed Deck, along with Legacy. We have added multiple $1,000 public events over the weekend in different formats. Plus there's an amazingly low room rate in our discounted room block at the event hotel of only $99. Special guests include in Matt Tabak from Wizards of the Coast and artists Rob Alexander and rk post. Join your friends for an epic set of experiences in Atlanta this summer that will be remembered by all.

Sleep-In Special
Got some byes? Want to get an extra couple hours of sleep instead of showing up at the venue early for the player meeting? Have we got a deal for you! If you have byes and register Friday night, you will be allowed to verify your byes during registration. Once confirmed, you will be eligible for the “Sleep-In Special" for an additional charge of $20.

Judges and Admin Staff
The Head Judge for this event is Scott Marshall. The official application window has closed to be considered for a judge or admin position. If you wish to volunteer for this event, want to discuss testing, or have other questions, please contact event judge manager Bryan Prillaman at bprill.MTG@gmail.com.

For a complete schedule of all public events please check back here or visit the Phoenix Games website at www.phoenixgamesinc.com. Here you will find not only the event schedule but information to help you plan every facet of your Magic weekend in Atlanta.

Rob Alexander and rk post will be in attendance. Artists will be on a very tight schedule for the weekend so we may limit the number of cards you can present for signing each time you go through the line. As other artists are confirmed we will add their information as well.

Grand Prix Atlanta will also feature a number of VIP spell-slingers, including Matt Tabak from Wizards of the Coast, alongside an impressive selection of top vendors from across the nation. For further details on who is attending and other attractions please visit www.phoenixgamesinc.com.

We have an incredible list of vendors who all help in making this and other Premier Events possible for you to enjoy. To support them and you, we will have staff, security and police enforce a strict policy of no cash trading or commercial level trading on the hotel premises. Anyone (buyer or seller) suspected of engaging in cash trades or commercial-level trading other then with vendors at their booth will be removed from the premises.

One of the first hurdles of attending any major city is simply getting there! Luckily for travelers, Atlanta is one of the most accessible cities in the world by plane, train, automobile, and bus.

For those of you planning on spending some time in Atlanta sight-seeing, we strongly encourage you to get a map of the city prior to arriving. Atlanta is well-known for its nonstandard layout, and its fondness for naming streets either "Peachtree" or "Piedmont."

Hartsfield International Airport (Airport Code ATL), just fifteen minutes south of downtown Atlanta or about 12 miles from the hotel, is a two-hour flight (or less) from 80% of the population of the United States and is the international hub for Delta Airlines.

Parking: There is very little free parking in downtown Atlanta but we have arranged a discounted valet parking fee for Magic Players at the Hyatt of only $20 a day. Other parking options exist nearby at various rates.

Quick Reference Driving Directions: When traveling northbound on 75/85, driving from Hartsfield-Jackson International Airport or traveling on Interstate 20 you should take 75/85 North to the right-hand exit of 248-C (International Blvd). Turn left onto International Blvd, then turn right at the third traffic light onto Peachtree Center Avenue. Hyatt Regency Atlanta's Motor Lobby entrance is one block on the left.

When traveling southbound on 75/85 or the GA 400, take exit 249-C (Williams Street). Go straight off exit and at the fourth traffic light, turn left onto Harris Street. Then take the third left onto Peachtree Center Avenue. The Hyatt Regency Atlanta hotel entrance is on the left.

MARTA Public Transportation
Atlanta boasts the second-highest rated public transportation system in North America. The Metropolitan Atlanta Rapid Transit Authority (MARTA) provides rapid rail service directly from Hartsfield International Airport to the Peachtree Center Rail Station. This station, "carved from the very living rock" ninety feet below Peachtree Street in downtown, is directly connected to the Hyatt Regency through the Peachtree Center Mall and Food Court. The entire walk is covered and almost entirely climate-controlled. The one-way MARTA fare anywhere on the system is $2.50. The MARTA rail system shuts down sometimes from about 1:00 a.m. to 5:00 a.m. for track inspection and maintenance, so plan to take alternate transportation to downtown (hotel shuttle, cab, rental car) if you're arriving or departing in the wee hours of the morning.

When Traveling via MARTA from the Airport:
Take the northbound train to the Peachtree Center Station stop, one stop north of the Five Points transfer station. Exit the train and take the escalator up towards Peachtree Center Mall. Once inside the mall, follow the signs to the covered walkway into the Hyatt hotel.