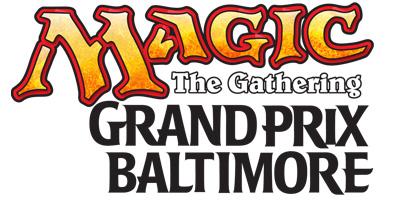 Baltimore—Charm City, home to Babe Ruth, Edgar Allen Poe, Billy Holiday, Francis Scott Key, and the Star-Spangled Banner. Come to the Baltimore Grand Prix and make your own history! All are welcome, no invitation necessary to be part of one of Magic: The Gathering's biggest events

The main tournament at Grand Prix Baltimore is open to Magic players of all ages.

Judges and Admin Staff
The Head Judge for Grand Prix Baltimore is Crisitiana Dionisio. Judges interested in working at this event should submit an application through dcifamily.org. Judge Certification is available at this event and should be arranged beforehand. Please contact Grand Prix Baltimore Judge Manager Ryan Stapleton with questions and/or to make arrangements for certification.

All Public Events at Grand Prix Baltimore will have a Planeswalker Points multiplier of 3x.

Steve Argyle, Eric Deschamps, and Matt Stewart will be at the Grand Prix throughout the weekend. Artists will be available for signings from noon - 9 p.m. on Saturday and 9 a.m. - 5 p.m. on Sunday.

Air
BWI Airport is located 10 miles from the Baltimore Convention Center. There are several budget options to get from the airport to the event site.

Driving
The Baltimore Convention Center is 1.4 miles from I-95. Directions from I-95: take exit 53 for I-395/ML King Blvd toward Downtown. Stay in left lanes, straight toward convention center. Take 1st Right onto W. Conway Street. Then take 2nd Left onto S. Charles Street. Proceed a half block: on your Right is the recommended parking garage, on your left is the entrance to “Exhibit Hall A” Baltimore Convention Center. Note: Please check back for special parking garage arrangement: $15.