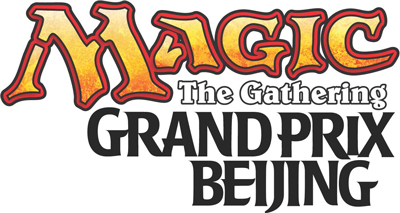 Regarded as one of the "Four Great Ancient Capitals of China," the Chinese capital city of Beijing has enjoyed a prosperous history of more than 3,000 years as a city and more than 860 years as a capital, its urban area dotted with places of historic and cultural interest.

In March 2014, the Grand Prix circut returns to Beijing as the first Standard format Grand Prix in Mainland China's Magic Grand Prix history. Besides the fierce competition for glory at the main event, you can also find pure fun of playing Magic at our various side-event offerings and enjoy the weekend-long perfect Magic experience. Get ready to bring your friends together to this Magic festival and have fun!

The main tournament at Grand Prix Beijing is open to Magic players of all ages.

Along with the main event, there are additional side-event tournaments to play in at a Grand Prix. Additional events and a full schedule can be found on Play! Events China’s website and Facebook page. Players living in Mainland China can also view Play! Events China’s Weibo or follow WeChat account PlayEventsChina to receive push notification of side event schedule at Grand Prix Beijing.

All side events (except casual events) will have a Planeswalker Points multiplier of 3x.

Svetlin Velinov is well-known illustrator and concept artist who lives in Varna, Bulgaria on the beautiful Black Sea coast. He graduated in with a fine arts degree from the National School of Arts "Dobri Hristov" and animation directing in "New Bulgarian University" in Sofia, but found his early inspiration and motives to start drawing in comics from his childhood. During his education in animation he has worked in advertising industry as graphic designer but shortly after his graduation in 2003 he started to build his professional career working as a freelance artist. With his experience over the years he developed his own well-recognizable style which is a mixture of his fine art approach to the digital illustration and the comics stylization of his characters, binding those two components into something which uniquely personalizes his own style.

Visa
Foreign visitors have to obtain an Entry VISA before entering China. You may apply for the VISA in Consulate of People’s Republic of China in your country. You may also contact your local travel agency for more details.

Travel to Beijing
Beijing is the capital of People’s Republic of China. The frequent flights, trains and buses make tourists’ travel to Beijing a breeze. The convenient taxis, buses, subway trains etc. can take you to any corner of the city.

You may take the Beijing Subway Airport Express Line, any of the airport buses or taxi to downtown from Beijing Capital International Airport.

More information on traveling between the downtown and the airport can be found at http://en.bcia.com.cn/traffic/airbus/index.shtml

By Train
Beijing has four railway stations, namely (as they would appear on railway tickets) Beijing, Beijingxi, Beijingnan, and Beijingbei. Please pay close attention to the name of your departure or arrival station printed on your ticket. All railway stations are not far away from Beijing downtown and are connected with at least one subway lines.

Transportaion to the Venue

By Subway
Beijing’s subway lines have connections all over the city, with stops at or nearby the main attractions and commercial areas. You may transfer between lines easily. The subway will provide you with fast and comfortable service except during rush hours.

Subway Line 10 may take you straight to University Science and Technology Beijing. Get off the train at XITUCHENG Station. Exit the station from Exit B and walk north for about 10 minutes. The University is on your right-hand side after crossing the North 4th Ring Road.

For more information on traveling in Beijing, please visit the following site: www.travelchinaguide.com/cityguides/beijing.htm