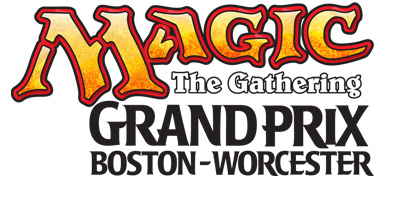 Grand Prix Boston-Worcester will be an exciting opportunity for competitive and casual Magic players alike. The sealed format will allow you to build your collection and hone your card-selection and deck-construction skills as you compete against players from around the world. This event features Magic 2013 Limited play, and the Planeswalker Points modifier of 8x will send your points soaring.

In addition to the main event, there will be Magic tournaments in a variety of formats running from Friday to Sunday, all with a Planeswalker Points multiplier of 3x. Card dealers from around the country will be on hand to help you round out your unique collection, and we also have an amazing Artists Alley. Whether you come to win, enjoy the spectacle, play in the side events, or just have a great time, there’s plenty for everyone.

TJ Collectibles and Wizards of the Coast proudly present Grand Prix Boston-Worcester. Visit www.tjcollect.com for updates and more details about the event schedule and activities.

The main tournament at Grand Prix Boston-Worcester is open to Magic players of all ages.

Staff
If you wish to volunteer as a judge or supporting staff member for Grand Prix Boston-Worcester, please contact our Judge Coordinator here.

For the latest updated schedule for the weekend's public events, please visit the TJ's website.

Mark Tedin and rk post will be in attendance at Grand Prix Boston-Worcester.

There will be an awesome array of vendors at Grand Prix Boston-Worcester all ready to get you those last-minute cards, sleeves, playmats and other great Magic items. Check the TJs website to find the latest information on scheduled vendors.

Grand Prix Boston-Worcester takes place in the DCU Convention Center, located in beautiful downtown Worcester, MA. For those of you who are wondering just how to pronounce the name, think of it as being spelled "Whista", and you'll be saying it like a native! The Convention Center is located in the heart of the downtown area. There are many available restaurants, ATM's and hotels in walking distance.

The best part of getting to Grand Prix Boston-Worcester is how accessible it is via public transportation! Follow this link to access driving directions to the DCU Convention Center.

Air Travel
TF Green International Airport in Warwick, RI, and Logan Airport in Boston are both less than 1 hour away.
Both Logan and TF Green have rail service to downtown Worcester, just a few blocks from the Convention Center.

From Logan: take the SilverLine 1 bus to South station. Transfer to the Framingham/Worcester train and get off at the historic Union Station.

From TF Green: Take the Providence/Stoughton train to South Station. Transfer to the Framingham/Worcester train and get off at the historic Union Station.

Train Travel
Both major airports offers connecting train service to Worcester, and the station is just a few blocks from the Convention Center.

You can also take the Amtrak train to Boston and connect directly to the Framingham/Worcester line.

If you are driving from the airport, follow these directions.

Public Transportation
The WRTA, the Worcester Regional Transit Authority, is your link to the city's most popular destinations. Enjoy Worcester the environmentally sensitive way, avoid the parking hassles and reach the city's key attractions.

WRTA hybrid bus technology features reduced emissions, which results in cleaner air. They offer several convenient routes to take you to Worcester's restaurants, hotels, theaters, universities, historic sites, shopping and more. Cost: $1.50 per person per Ride or $3.50 for a whole day. (See the WRTA webpage for schedule and information.)

About Worcester
Since many players combine a Grand Prix weekend with vacation time both before and after the event, we've assembled a small collection of links about the city and some of its points of interest.

From upscale bistros to alfresco dining to historic inns specializing in time-honored New England cuisine, there is truly something in Worcester to satisfy everyone's taste. Whether it is American, Italian, Chinese, Middle Eastern or Mexican, you're sure to find a memorable dining experience. These restaurants come highly recommended as excellent places to get some delicious food and chill out after a competitive day of slinging spells.

Shopping and Attractions: Worcester and the surrounding region offer a wide array of arts and cultural showplaces including museums, theatres and performing arts venues, as well as a variety of specialty shops and malls. Discover the hottest places in Worcester, a region of rich heritage and an even brighter future!