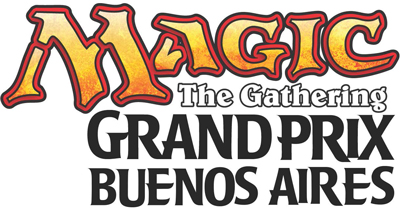 Registration: USD 50 equivalent
Online registration available at http://www.gpbue.com/en/inscripcion/ until 3/12 for players signing up for the VIP package and 3/13 for all others.
On-site registration: Friday, March 14th from 10 a.m. – 9 p.m.

Golden Center is a green-surrounded modern convention center, very close to River Plate. Close to the city but away from the noise—the perfect place to host a Magic: The Gathering Event in Buenos Aires.

Grand Prix Buenos Aires is an event any Latin American player cannot miss. Aiming to be the biggest GP in Latin America ever, our side event schedule will be full of exciting events for seasoned and newer players alike. We will have international and regional vendors and Magic artists Willian Murai and Raymond Swanland.

There are a plenty of hotel options nearby, as well as many more if players want to stay closer to the heart of the city.

The main tournament at Grand Prix Buenos Aires is open to Magic players of all ages.

Along with the main event, there are additional side-event tournaments to play in at a Grand Prix. Listed below are the side events offered at all Grand Prix on Friday, Saturday, and Sunday. Additional events and a full schedule can be found on the www.gpbue.com website. All side events (except casual events) will have a Planeswalker Points multiplier of 3x.

Prominent Magic artists Willian Murai and Raymond Swanland will be on hand for free signings of your favorite cards, plus you'll have the opportunity to buy prints and even original artwork.