The Magic: The Gathering

Win a trip to Grand Prix Barcelona
...and many other Magic prizes!
At Grand Prix Cardiff fill out the voucher* that you'll find at the registration desk and deposit it in the designated box Saturday, March 25 before 5 pm. A draw will be held on Saturday, March 25th - at 6pm.

There is no pre-registration necessary for this event because it is open for everyone to enter.

The main tournament at Grand Prix–Cardiff is open to Magic players of all ages.


NOTE: The following hotels are not endorsed by or affiliated with Wizards of the Coast. The hotels on this list are taken from guidebooks and provided here for your convenience only.


NOTE: The following travel web sites are not endorsed by or affiliated with Wizards of the Coast. 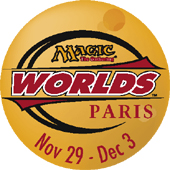 We also want your feedback, suggestions but most of all we would like to know how you are preparing for the event. We will post everything on our brand new Player Forum so you can also see how other Magic players are doing. So e-mail us at: magiceurope@hasbro.be