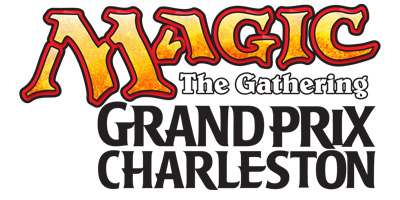 Recently voted “Top City in the US” in the 2011 Conde Nast Traveler Readers’ Choice Awards, Charleston, South Carolina offers excellent tourism options, and while the history, sights, sounds, and flavors are all great, we know a trip to Charleston in mid-November is really about getting together with friends to have fun, trade, and play Magic!

An awesome weekend experience begins with you staying right at the Convention Center in at Hilton Embassy Suites, a hotel attached to the site offering a discounted rate for Grand Prix attendees. The rate is just $159 per night and includes free breakfast and free parking at the hotel. Details are below on how to secure your room before they sell out.

The Grand Prix Charleston public events schedule features expanded prize pools for the Friday Standard and Friday Sealed Grinders. Events will also include a Sealed $1K and Standard $5K on Sunday along with much more over the weekend for you to enjoy. Details on these events, special guests, vendors and promotional items will be made available at www.PhoenixGamesInc.com as they are finalized.

The main tournament at Grand Prix Charleston is open to Magic players of all ages.

Staff
The Head Judge for this event is Jeff Morrow. The official staff application window has closed, if you still wish to volunteer for this event, want to discuss testing, or have other questions, please contact judge manager Bryan Prillaman at bprill.MTG@gmail.com.

For a complete schedule of all public events please visit the Phoenix Games website. Here you will find not only the event schedule but information to help you plan every facet of your Magic weekend in Charleston. Some of the planned public events include Standard and Sealed Friday trials with extra prizes in the pool, a TCGPlayer Sealed $1K & Star City Games Constructed $5K on Sunday. Drafts, Win-A-Box tournaments, Commander, and other events will occur throughout the weekend.

Travel by Air
The Charleston International Airport (Airport Code CHS) is served by a number of airlines including American Airlines, Delta, United, US Airways, and Southwest. The Charleston Convention Center and Hilton Embassy Suites Host Hotel are just outside the airport entrance so you can be relaxing in your room within minutes of collecting your bags.

Travel by Car
The Charleston Convention Center is a pay-to-park facility but we have secured a discounted daily parking rate of only $5.00. Be sure to tell the parking attendant you are with Phoenix Games to receive this discounted rate. If you are a guest of the Hilton Embassy Suites in our discounted room block, parking is free.