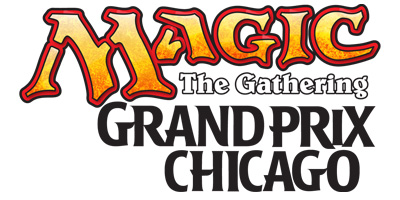 Get your promo card by playing in the Grand Prix (while supplies last). The Chicago Cubs, the White Sox, the Blackhawks, the Bulls, Da Bears. Gabriel Nassif, Randy Buehler, Kai Budde and Bob Maher. All of these teams and people have one thing in common—Champions of Chicago. Be it Grand Prix or Pro Tour, the World Series (ok, maybe not the Cubs), Super Bowl, NBA Finals, or the Stanley Cup, Chicago is home to winners ... and you just have to ask yourself "are you next?" Get here early and play often as Friday features great promotions and events starting when the doors and registration open at 2 p.m.!

Brought to you by Pastimes, the Grand Prix comes to Chicago is going to be spectacular. Starting with the incredible venue—Navy Pier—this event is located where the action is, on amazing Lake Michigan in the heart of Chicago. Navy Pier is the No. 1 tourist location in the Midwest, with over 8 million visitors each year. It's the place where all of Chicagoland and tourists from around the world have come together since 1995 to enjoy the beauty and the thrills of a day on Lake Michigan. From rides to restaurants, exhibitions to entertainment, shopping to dining cruises and tour boats, Navy Pier has it all—in a location unlike any other!

In addition to the main event, Chicago’s Grand Prix weekend offers one of the largest schedules of public events ever brought to a Grand Prix—including a $5,000 TCGplayer Diamond Standard event on Sunday, as well as serious Legacy and Commander events. We have brought back the "Public Events Weekend Champion," with huge prizes across the public-event schedule. Twelve amazing vendors from all over will be on site to buy, sell and trade cards with you.

Grab your friends—this is a Grand Prix weekend you are not going to want to miss!

The main tournament at Grand Prix Chicago is open to Magic players of all ages.

Staff
The Head Judges of this event are Jason Lemahieu (Level 5) and Chris Richter (Level 4), and are flanked by an all-star cast of great judges! For more information about judging, please click here or email staff@pastimes.net.

Got some byes? Want to get an extra couple hours of sleep instead of showing up at the venue early for the player meeting? Have we got a deal for you! If you have byes and register Friday night, you will be allowed to verify your byes during registration. Once confirmed, you will be eligible for the “Sleep-In Special" for an additional charge of $20. Also, your decklist MUST be given to our registration staff before the end of the player meeting on Saturday morning. You may give this to our staff when you register or at any time on Friday, you may send it with a friend, or you may email your list to us at decklist@pastimes.net. If we do not have a list, you will receive the appropriate penalties.

Pastimes VIP Program (Very Important Player)
Want to make the Grand Prix weekend a little easier? We have come up with a great way to make that happen. Consider it an upgrade…

If you would like to sign up for the VIP Program, head straight to the VIP line to register. Cost of the VIP Program is $60 (this does not include your Grand Prix Entry).

Information about public events and more can be found at the Grand Prix Chicago page at Pastimes.net.