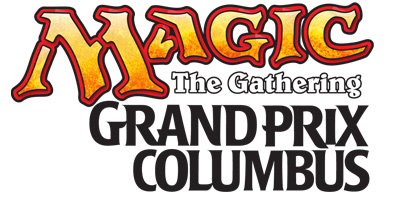 Grand Prix Columbus offers you a fantastic opportunity. Not only is Columbus centrally located, but Columbus is an affordable city -- just what you need in today's economy. Plus, you'll get friendly Midwestern hospitality. Thousands of hotel rooms and hundreds of restaurants are just a short walk from the venue. Play in a multitude of events offered Friday through Sunday, meet Magic artists Steven Belledin and Steve Prescott and get some of your favorite Magic cards autographed, and hang out with fellow Magic players from the surrounding area and around the world! Entry to the event hall is free and all are welcome. Visit www.professional-events.com for more details about public events and everything else going on at the venue.

To make your trip even easier, PES has arranged a fantastic room rate of $119 at the attached Drury Inn! The Drury Inn includes free HOT! QUIKSTART ® Breakfast, free long distance, free KICKBACK® - from 5:30 – 7:00 pm (includes hot food and drinks!), free high-speed internet access and an indoor/outdoor pool & whirlpool! Complete reservation information can be found in the Travel Information section below.

The main tournament at Grand Prix Columbus is open to Magic players of all ages.

Judges and Admin Staff
The Head Judge for Grand Prix Columbus is Chris Richter. If you are a judge interested in volunteering, please submit an application through DCI Family at www.dcifamily.org/event/461. If you have any questions regarding judging, please contact Steven Briggs at judgebriggs@gmail.com. We are accepting applicants until May 21, 2012. Send your applications early; we will consider all applications as they are received. Judge certification will be available on site.

For a complete schedule of all public events please visit the Professional Event Services website at www.professional-events.com. Here you will find not only the event schedule but information to help you plan every facet of your Magic weekend in Columbus.

All Public Events at Grand Prix Columbus will have a Planeswalker Points multiplier of 3x.

We have two amazing artists for Grand Prix Columbus in Steven Belledin and Steve Prescott. They will be making appearances Saturday and Sunday.

Columbus is easy to get around. The main east-west highway is I-70. There are two primary north-south freeways, I-71 and St. Rte. 315. The outerbelt, I-270, circles the city. I-670 connects the airport to downtown and continues to the west side.

Cars, vans and limos can be rented from a variety of points in the city. Taxi service is provided by many vendors and airport shuttles are available, as well. View all transportation companies here.

Parking and driving is very easy in downtown Columbus. A great map with detailed parking information can be found here.

Driving Directions to the Convention Center

Port Columbus International Airport is located just 10 minutes east of downtown. State-of-the-art facilities feature the latest in airport safety and security, passenger comfort and convenience, plus high value air service by all the major air carriers, including Air Canada Jazz, AirTran, American, Continental, Delta, Midwest/Connect, Northwest, Southwest, United, US Airways and USA3000. Taxi service is provided by many vendors. The average fare from Port Columbus International Airport to downtown is $18-$20. Airport shuttles also are available. Airport parking is available from Thrifty and others.

Things to See and Do in Columbus

Columbus is fortunate to have a dynamic downtown, a wonderfully bohemian arts district, a lively theater and music scene, and top-notch museums. It's also the home of The Ohio State University (never leave off that "The"), which on football weekends is a Mecca for red-jersey-clad fans and an upper-echelon academic institution the rest of the year.

In downtown Columbus alone, you'll find more than 100 restaurants offering most every kind of cuisine.

You can touch a real, massive iceberg and see 20-plus artifacts on exhibit for the first time anywhere at "Titanic: The Artifact Exhibition" thru Sept. 6, 2010 at COSI.

Watch polar bears as they frolic underwater and swim overhead as you walk through an acrylic tunnel under their huge pool. Polar Frontier opens this spring at the Columbus Zoo and Aquarium.

Climb aboard the Santa Maria, the world’s most authentic replica of Christopher Columbus’ ship. Learn about the teamwork it took to survive while crossing the Atlantic.

Go birding at the Grange Insurance Audubon Center, which opened in 2009 as one of the first Audubon centers close to the core of a major American city.