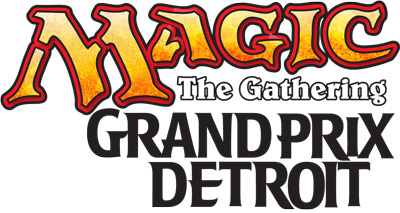 The American Revolution. The Underground Railroad. Birthplace of the automobile. The Civil Rights movement. Motown. If you didn't already realize it, the city of Detroit is a goldmine for history. Is it your turn to make history? Join Professional Event Services at Grand Prix Detroit and make your own history! Your 2013 season can continue on the right foot by building your Lifetime, Competitive, and Professional Planeswalker Points with Grand Prix Detroit's Planeswalker Points multiplier of 8x for the main event and side-event Planeswalker Points multipliers of 3x!

Grand Prix Detroit is open to the public and all players are invited to come and participate. Grand Prix Detroit is a two-day event featuring the Modern format. In addition to the main event, the Grand Prix Detroit weekend offers one of the largest schedules of side events ever brought to a Grand Prix—including an opportunity to win a VIP trip to Seattle in February 2014 (prize includes trip and accommodation, VIP visit of Wizards of the Coast headquarters and special events with Wizards employees and a chance to play for cash and glory)! Side events and Last-Chance Grand Prix Trials will be held Friday, September 13, on-site starting at noon. Visit www.professional-events.com for more details about side events.

Prominent Magic artist Christopher Moeller will be designing a playmat to commemorate the event. The first 500 players who register for Grand Prix Detroit on-site Friday will receive a playmat (while supplies last). The playmat will also be offered to any player who purchases the VIP Detroit package (see below).

Visit the Professional Event Services website to preregister on-line for the event. You can event submit your deck electronically!

The main tournament at Grand Prix Detroit is open to Magic players of all ages.

Judges
The Head Judge for Grand Prix Detroit is Jared Sylva. Applications for stage staff are closed. We are accepting judge applicants until August 1, 2013. You can apply here. Judge certification will be available on site. Please contact Chris Stagno at cstags10@gmail.com for details and to arrange your certification.

Along with the main event, there are additional side-event tournaments to play in at a Grand Prix. Listed below are the side events offered at all Grand Prix on Friday, Saturday, and Sunday. Additional events and a full schedule can be found on the Professional Event Services Grand Prix Detroit website. All side events will have a Planeswalker Points multiplier of 3x.

We are committed to providing great artists for the show. Check back soon for more details!

COBO Center is located right in the heart of downtown Detroit. Currently, Cobo Center has 2,000 parking spaces available on a first-come, first-served basis at the Cobo Roof Deck, Washington Blvd., and in the Cobo Center Congress Street Garage.

Cobo Center is located in downtown Detroit at the Corner of Washington Blvd. and East Jefferson. Please click here for map/directions.

Want to fly in? The Detroit Metropolitan Airport ranked #1 in customer satisfaction for 2010 by J. D. Power Associates. Detroit is only a 90-minute flight from 60 percent of the nation's population. As a major hub for Delta Air Lines you can take advantage of discounted airfare for your conferences and conventions meeting in metro Detroit.

Detroit is a very diverse city, featuring great sports, entertainment and pop culture. There is something for everyone in Detroit! Visit The Detroit Convention & Visitors Authority web here for all the information you could want about Detroit!