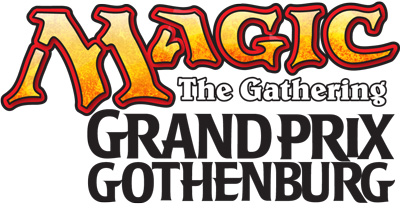 Welcome to the friendliest city in Sweden! The Swedes have voted Gothenburg as the friendliest city in Sweden and hopefully you will join us at the Grand Prix to find out why. Gothenburg offers a massive choice of first-class restaurants, cozy pubs, bargain shopping, theatres, museums and other attractions to suit all tastes. The relaxing and friendly atmosphere is just part of the deal as all the best entertainment in central Gothenburg is within easy walking distance of the Swedish Exhibition Centre!

But you'll be coming to Gothenburg to play Magic: The Gathering and we have an exciting schedule of events lined up for you. Day one of the main event will be Return to Ravnica Block Sealed Deck, one of the most exciting sealed blocks ever. However, the side event schedule will be jammed with other formats and exciting events to get your card playing juices flowing. And remember, if you register for the main event before 5 p.m. on Friday, you will receive one of the GP Gothenburg limited edition playmats (while stocks last).

The main tournament at Grand Prix Gothenburg is open to Magic players of all ages.

Judges
The Head Judge for Grand Prix Gothenburg is Jurgen Baert. Judges interested in working at this event should submit an application through the ( Magic judge website ).

Along with the main event, there are additional side-event tournaments to play in at a Grand Prix. Listed below are the side events offered at all Grand Prix on Friday, Saturday, and Sunday. Additional events and a full schedule can be found on the Gordian Knot Games. All side events will have a Planeswalker Points multiplier of 3x.

Magic Game Show
On Friday at 8pm we start the Magic Game Show starring Richard Hagon. Registration is free and you can win some cool Magic goodies. Teams can be comprised of between 1 and 4 people.

Mike Bierek and Mathias Kollros will be in attendance at Grand Prix Gothenburg.

Arriving by Plane
From Landvetter Airport
The airport bus stops at Korsvägen opposite the Swedish Exhibition & Congress Centre.

From Gothenburg City Airport (Säve Airport)
The airport bus stops at Nils Ericssonsplatsen/Central Station. You can take a tram from there, as described above.

Arriving by Train from Central Station
Take a number 2 or 4 tram from Drottningtorget. You can also take a number 5 tram from Brunnsparken. The trams stop at Korsvägen opposite the Swedish Exhibition & Congress Centre and Gothia Towers.