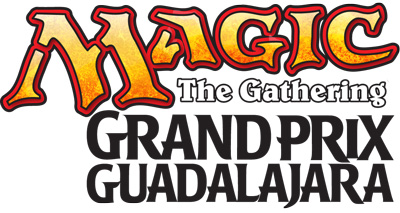 Welcome to Guadalajara, Mexico's second-largest city and land of some of the most iconic and popular Mexican cultural references, such as Mariachis and Tequila. This city is proud to host the third Magic: The Gathering Grand Prix ever held in our country.

This Standard constructed event is the perfect occasion to have a blast and show the world how serious is your game; both competitive and casual players are welcome to bring their best decks and strategies to the largest magic event of 2013. Planeswalker points will be given away with an x8 multiplier for the main event, and x3 for all side events, boosting your stats like no other event.

Grupo Necrotower has planned an all-around weekend for everyone. Invited artists will be signing cards, sketching, and showing some of their most recent and iconic pieces; both national and international dealers will be at hand, spellslingers, raffles, contests, 8-person events, casual tournaments, great prizes, tons of players, all together in one great amazing weekend.

Preregister for the main event in person on Friday and you can get an exclusive playmat with exclusive art by Rob Alexander (while supplies last). A sleep-in special will also be available allowing players with byes to get a few more resting hours (for a fee; full sleep-in special information coming soon). Check out www.gpguadalajara.mx for more details on these and other promotions.

The main tournament at Grand Prix Guadalajara is open to Magic players of all ages.

Judges
The Primary Head Judge for Grand Prix Guadalajara is Carlos Ho, Level 4 from Panama. Judges may apply for this event via Judge Apps at http://apps.magicjudges.org/events/285/.

Along with the main event, there are additional side-event tournaments to play in at a Grand Prix. Listed below are the side events offered at all Grand Prix on Friday, Saturday, and Sunday. Additional events and a full schedule can be found on www.gpguadalajara.mx/. All Public Events at Grand Prix Guadalajara will have a Planeswalker Points multiplier of x3.

Along with all play related activities we’ll have a “sombrero extravaganza” theme going on over the weekend, with great promotions, additional prizes and contests for everyone bringing a sombrero, hat, or any other original headset to this event.

To start with, everyone bringing their own sombrero to preregistration will get a big discount on the entry fee. You can check on this and other "sombrero" promotions at www.gpguadalajara.mx/.

The venue is located in downtown Guadalajara right in the heart of this historical Jalisco city, only a few blocks away from the famous cathedral and the finest shopping malls in Guadalajara.

The easiest way to get there from the airport and bus station is on taxi. You can get information about the public transport system here: http://www.rutasjalisco.gob.mx/

Traveling by bus is really easy in México, Guadalajara is only 6 hours away from Mexico city, if you have time and you're travelling from outside of México you may consider getting a flight to Mexico City and taking a bus or a low cost plane from there.