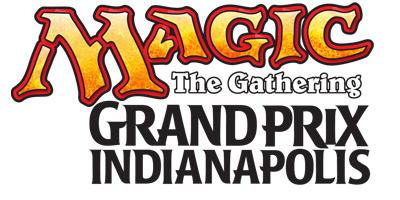 Easy to get to by car, train and plane and so central to so much of the United States, Indianapolis is often known as THE hub for gaming! This Grand Prix weekend will keep that tradition going with great fun for all, from the most casual player to the ultra competitive.

What better way to get in the holiday mood than joining hundreds of your new closest friends to play Magic? That’s right, just a few days before Christmas, a gathering is coming to Indianapolis—a gathering of Magic proportions! Grand Prix Indianapolis will be the feature event of this fun weekend and to make it even better, it is Return to Ravnica Sealed Deck. So don’t worry about what choosing what deck to play – you do not need to bring any Magic cards with you to play in the main event. Of course, if you're interested in the Commander, Legacy, Modern, and Standard side events you'll want to pack a deck or two!

There's a lot more to experience at Grand Prix Indianapolis:

For more details on all of these amazing activities, visit pastimes.net. So join us for this incredible weekend and be ready for your holiday season to be Magic!

The main tournament at Grand Prix Indianapolis is open to Magic players of all ages.

*For the 2013 Grand Prix season, Grand Prix byes earned through 2012 Pro Tour Players Club level will only be awarded at Grand Prix Indianapolis.

Byes are not cumulative throughout the season or year. Byes do not pass down under any circumstances. Players who accumulate multiple byes to a particular Grand Prix tournament receive only the bye for the greatest number of rounds. For complete information about Grand Prix byes and their corresponding competitive season, please check the Magic Premier Event Invitation Policy.

There will be an incredible mix of events occurring at this event starting on Friday, December 21 and continuing through Sunday, December 23. For a complete list of events, see www.pastimes.net.

Steve Argyle and rk post will be at Grand Prix Indianapolis.

Got some byes? Want to get an extra couple hours of sleep instead of showing up at the venue early for the player meeting? Have we got a deal for you! If you have byes and register Friday night, you will be allowed to verify your byes during registration. Once confirmed, you will be eligible for the “Sleep-In Special" for an additional charge of $20. As this is a Sealed Deck event, we will register your card pool for you. All you need to do is build your deck!

Pastimes VIP Program (Very Important Player)
Want to make the Grand Prix weekend a little easier? We have come up with a great way to make that happen. Consider it an upgrade…

If you would like to sign up for the VIP Program, head straight to the VIP line to register. Cost of the VIP Program is $60 (this does not include your Grand Prix Entry).

Ground Transportation from Indianapolis Airport
IND features two taxi stands located on the lower level of the terminal. To call a cab, locate the overhead taxi signs and push the call button. All cab fares to and from IND include a $15 minimum charge, regardless of distance. A cab ride to the Central Business District should take around 10-15 minutes.

By Trainbr/&gt; Indianapolis can be accessed by train from various cities throughout the Midwest. Contact Amtrak at +1 800 872 7245 or www.amtrak.com for more information.

By Car
Indianapolis is served by a number of major Interstates as well as state highways. I-65 runs north-south from Chicago to Louisville while I-69 also runs north to Fort Wayne. I-70 runs through Indianapolis from St. Louis to the west to Columbus, OH just south of Indianapolis. I-74 runs east-west from Cincinnati to Danville, Il. I-465 runs around the city as well as connects all the major interstates and I-865 also serves as a connector for the major interstates. Six U.S. Highways also run through Indianapolis. They are: US 31, US 36, US 40, US 52, US 136 and US 421.