UPDATE MARCH 17, 2011: Grand Prix Kobe has been postponed following Friday’s magnitude 9.0 earthquake and resulting tsunami in Japan. Originally to be held March 19-20, the Grand Prix has been rescheduled to April 23-24, 2011.

Due to significant safety, power, and travel concerns across the eastern portion of the country as well as a national call to conserve resources, Wizards of the Coast believes it is not appropriate to continue with the event as scheduled. We extend our thoughts and sympathies to all those affected by the disaster.

For information about how you can help, visit www.redcross.org and donate to Japan Earthquake and Pacific Tsunami.

Kobe is a city rich with Magic history, having hosted the first Pro Tour to be won by a Japanese player (Masashiro Kuroda, 2004) and the largest Grand Prix in Japan to date (1350 players, 2001). This will be the fourth Grand Prix held in Kobe.

Kobe is the fifth-largest city in Japan, with a population of approximately 1.5 million. One of the first cities to open for trade with the West following the end of the Tokugawa Shogunate in 1868, Kobe has long been known as a cosmopolitan port city. The city is the point of origin and namesake of Kobe beef as well as the home of one of Japan's most famous hot spring resorts, the Arima Onsen. Other well-known locations in the city include the Ikuta Shrine, the Kobe Port Tower, and its large Chinatown.

8-person pick-up tournaments will be run throughout the weekend on-site. All 8-person tournaments are DCI sanctioned events. Entry fee is ¥1500 for a Booster Draft tournament (Mrrodin Besieged x1, Scars of Mirrodin x2), ¥500 for a Constructed tournament. 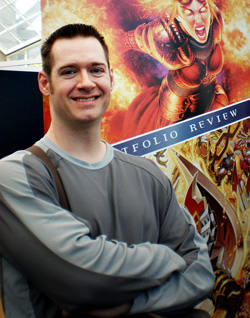 Steve Argyle
Amid a labyrinth of empty soda cans and books, Steve Argyle can often be found scribbling away by the glow of a computer monitor. Steve Argyle has been creating powerful imagery for Magic for four years. New, but working hard to establish himself among the pantheon of Magic artists. Iconic cards such as Chandra Ablaze, Admonition Angel, Slave of Bolas, and Everflowing Chalice are his handiwork. Additionally, Steve adds flair to old favorites with promo art, such as the FNM Bloodbraid Elf, the Pre-Release Glissa, the Traitor, Promotional Emeria Angel, and his very first Magic card, Player Rewards Textless Ponder. And Steve is just getting started. He couldn't be more excited about coming to the Kobe Grand Prix, and meeting with the players, who are the reason he works so hard on his art. You can check out most of it on his website, www.steveargyle.com.