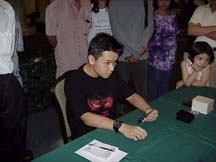 Alec Ling's elf-heavy Stompy dec faced off against Soh's Necro'Donate deck in round ten. Ling started off fast, attacking aggressively with Wild Dogs and Lanowar Elves on turn two, and tried to get an Elvish Lyrist out. Soh, realizing that he had no creature-kill in his main deck, had to use Demonic Consultation to get an emergency Force of Will, which he cast by removing a Donate from the game.

Having stopped the initial threat, Soh ritualled out a Necro, and refilled his hand. After Ling's next turn, he was down to 2 life. Consulting for an Illusions of Grandeur, he went back up to 22, then down to 13, keeping two Donates, Mana Vault, Force of Will, Dark Ritual, Swamp, and another Illusions of Grandeur. Soh realized that Ling would be able to pay the cumulative upkeep on Illusions for one turn, after which he could probably kill Soh with creatures. 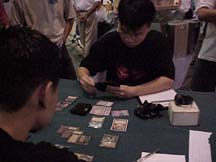 To get around this problem, Soh simply Donated his first Illusions of Grandeur to Ling, and then played and Donated another one, all on the same turn. Unable to afford the combined upkeep, Ling conceded game one.

After sideboarding, Soh's deck got stronger, as the Contagions he brought in would usually get two creatures off the board. As it happened, Soh played three Contagions in the course of the match, which he won on turn four in much the way he won game one.