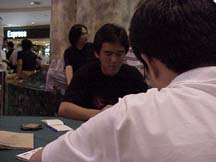 If nothing else, they're not playing Necro-Donate. Khoo Wei Ren was playing Enlightened WW, and Scott Thong was playing Burn with Furnace of Rath. Many Sligh decks now have Seal of Fire and Shock now. This can be dangerous when they can't be used as creature removal, but they're excellent when playing against decks full of small creatures. However, this deck had another problem: its two Lightning Dragons and three Cursed Scrolls are almost its only sources of continuous damage.

Thong mulliganed twice to start the match, and opened with Seal of Fire. For a while, they traded creatures for burn spells. Ball Lightning hit for six, but there were more creatures than there were removal spells. Then Masticore hit and Ren won the game quickly. 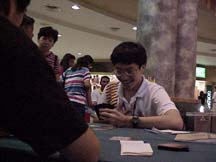 In game two, Ren had Ivory Mask in his opening hand. The Burn deck depends on Anarchy to get rid of the Mask, but Thong never drew one of his three Anarchies. He did have two Cursed Scrolls and a lot of land, however, so all the white creatures that hit the table died. The Masticore in Ren's deck (he used Enlightened Tutor to get it) died to Seal of Fire and Shock. With his other Tutor, he got Cursed Scroll and began to use it. Thong finally drew Lightning Dragon, but it was one turn too late; It got Ren down to one and then the Cursed Scroll finished Thong off before Thong would have had to use Swords to Plowshares on the Dragon. Ren's better draws carried the match.