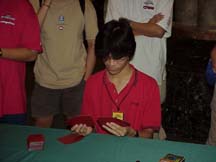 Dark Ritual and Mana Vault were just banned by the DCI to break up the best deck in the format: Necro-Donate. When Necro-Donate gets a good draw, it is almost impossible to beat. Jun-Wei Hew was playing Necro-Donate, and his opponent Jim Len was playing two-color Oath of Druids, similar to the deck played in Chicago by Dirk Baberowski. The match should depend on whether Necropotence hits the table or not, with Duress and Force of Will to protect it against counterspells.

Hew's deck was known to Len. Len won the flip and looked at his hand: Island, Wasteland, three Counterspells, Brainstorm and Treetop Village. Normally, that's a good hand. Its two problems are not having a second blue mana and not having a Force of Will; it also didn't have an Oath or Powder Keg, but in this matchup that didn't matter. I would consider that a good hand, though, since you can Brainstorm on turn one. Missing a Thawing Glaciers also doesn't matter much here; the card is often too slow. He chose to mulligan the hand. His new hand wasn't as good: Mana Leak, Oath of Druids, Treetop Village, Wasteland and Tropical Island. With only six cards, he had to keep that. Hew kept his hand.

Len opened Tropical Island; Hew opened Swamp. Len played another Tropical Island. Hew then played an Underground Sea, Duressed away Mana Leak, and used Dark Ritual to get out Necropotence, and paid six life. He threw out Necropotence and Underground River. Len Wastelanded the Underground Sea. Hew played a Badlands, Vampiric Tutored for Illusions (he had Donate), and paid four life. Len played Treetop Village. Hew played Underground River, got Duress countered, Duressed again and got Oath of Druids, and Necroed down to four. He took three from the Treetop Village down to one. Then he played an Underground Sea, cast Illusions of Grandeur, and Necroed down to seven to get the ideal hand, and next turn Donated the Illusions for the win.

One of the most interesting parts of this match was the sideboarding. At first, Hew took out all four Illusions and all four Donates for four Phyrexian Negator and four Pyroblast, and Len took out all his creature defense to fit in Refreshing Rain, the fourth Annul, Hydroblasts and Emerald Charms. Under this configuration the Negators are almost certain to win the game. Then Len said "Four Negators, three Pyroblasts" and went back to his sideboard to change one card, taking the fourth Annul back out for a Mana Short. At this point, Wen took out the Negators and four other cards to put the four Illusions and four Donates back in.

That gave Len a shot, but Wen's draw was too good. Len played a first turn Tropical Island, then Wen played Underground River and Ritualed out Necropotence. Len Force of Willed, and Wen Forced back with a Donate and Necroed to 13. Len Wastelanded the River and Wen played Swamp and Mana Vault, and paid four life. Len played Tropical Island. Wen played an Island and paid three life down to 4. Len continued to assemble an almost ideal hand (his last three topdecks were Forbid, Force of Will and Refreshing Rain). But Wen had the ideal hand as well. He played Gemstone Mine, Dark Ritual, Duressed a Counterspell, played Illusions of Grandeur, and Force of Willed Force of Will. Len used the Rain slightly early, since he let Wen know he had to go off twice when choosing how many cards to Necro for, but it was a minor point. Wen paid down to seven. Wen drew an uncastable Forbid (one of his 3 lands was Thawing Glaciers) and did nothing. Wen paid for Illusions, played Badlands, and cast Demonic Consultation for Donate. If there is a Donate in the top six, he loses: He can only get Len down to four. But he didn't, so there was still one in the deck. He gave the Illusions to Len and drew all but one card. That one card wasn't the Donate, which would have been bad but probably not deadly. Len used Thaw to get Forbid mana and drew Mana Leak. Duress took Mana Leak, and Forbid was Force of Willed, so the second Illusions hit the table. Wen used Thaw on upkeep since he had no more three cost counterspells (it might have been slightly wrong because of Brainstorm and Impulse), and drew Force of Will. He had no mana and no blue card, so Illusions was Donated again and that was match. Another victory for the awesome power of Necropotence.