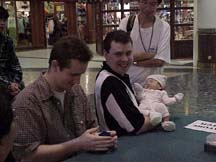 This round Bob Maher faced Tsuyoshi Fujita, the highest ranked Japanese player at Worlds. Bob Maher was playing the deck that won him a Pro Tour and a Grand Prix, Oath of Druids, with Seal of Cleansing and Ancient Hydra from Nemesis replacing Shard Phoenix and Aura of Silence. Tsuyoshi went first and mulliganed. He played first turn Flood Plain, and Maher Wastelanded it. Tsuyoshi didn't have a second land. At this point, his hand was Swords to Plowshares, two Duress, Demonic Consultation and Force of Will. It still was not entirely clear what he was playing, especially if you don't count the Swords to Plowshares, which Maher never saw. Maher played Treetop Village, and Tsuyoshi missed another land drop. Maher played Tropical Island and Gaea's Blessinged back in his Wasteland. Tsuyoshi drew Flood Plain. Maher played Tundra and cast Spike Feeder. Tsuyoshi played Volcanic Island, searched for Scrubland and cast Duress taking Counterspell. Maher Impulsed (past three Force of Wills) into Wasteland, and killed Scrubland. Tsuyoshi missed another land drop, and discarded first Demonic Consultation and then Duress. Maher started attacking with Treetop Village. With Tsuyoshi at 11, Maher cast Brainstorm and Tsuyoshi Force of Willed with a Sliver! Maher played a land, attacked and Tsuyoshi scooped.

Before the Sliver was removed from the game, Maher didn't know what deck Tsuyoshi was playing. The Flood Plain was a big hint - if Tsuyoshi was playing Necro-Donate with an odd mana base, it would have been Bad River. But with the Sliver out of game, Maher knew the rest of the deck almost card for card. So he followed the standard plan for Countersliver, putting in Powder Kegs, Pyroblasts, two extra Oaths and Crater Hellion. Tsuyoshi chose to keep a five land draw game two, which is ordinarily a mulligan for such an aggressive deck but becomes better if Maher is going to use Wasteland as much as possible.

Maher played the first spell, a Sylvan Library with a Treetop Village and Tundra. He paid four life to keep an extra card the next turn. On turn four, Tsuyoshi finally cast a Crystalline Sliver, now with Counterspell backup. Maher was busy searching for the ideal hand. He Impulsed, Brainstormed, found two Powder Keg but wanted Force of Will and Oath of Druids. His Enlightened Tutor was Counterspelled, and he Impulsed on upkeep instead of dropping Powder Keg to not look at the same two cards again.

We talked this play over after the match, and there's something to be said for both approaches. His hand had Abundance in it and didn't have a second green, so I didn't think it would be bad to draw Treetop Village, but Maher thought from his opponent's reactions that Tsuyoshi had no more land and wanted to use his Wastelands in hand. He did, but Tsuyoshi had more land to play. The Impulse worked, however, and found Oath of Druids. Tsuyoshi played Muscle Sliver and attacked Maher down to 11. Maher used his second Wasteland to deny Tsuyoshi two blue mana and cast the Oath with Hellion on top of his deck from Sylvan Library. Tsuyoshi went all out to beat the Oath on his turn (Maher went down to six from the attack) with Acidic Sliver and Winged as well. Maher Oathed up the Hellion to clear the board. Tsuyoshi got Acidic Sliver again, the one creature Maher still had to fear, and Maher Oathed up Morphling and dropped Abundance. When he found a Swords to Plowshares and Force of Will, he had the game more or less in hand. Tsuyoshi took out Sylvan Library with a Seal of Cleansing (which was one choice Maher never thought he would make, and he just used Enlightened Tutor to get it back). With the card advantage of Sylvan/Abundance and Oath keeping the Slivers in check, the game was over quickly.