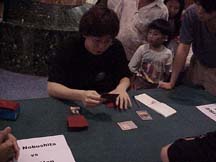 It's not entirely clear why Necro-Donate wasn't played by more people, considering that everyone accepts it as the deck to beat. It's possible that the cards have gotten too expensive, which would explain why the two most popular decks in the tournament, Sligh and Stompy, rely heavily on commons.

Nobushita elected to play first, and started with a Dark Ritual and a Necropotence. Hon's start was equally typical for his deck: Mountain, Jackal Pup. 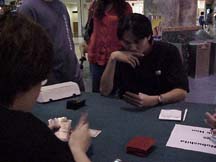 On his second turn, Nobushita already had a Force of Will, Illusions of Grandeur, and a Donate. Playing a Peat Bog, he Vampiric Tutored and ended his turn. Hon attacked with his Pup, and got Nobushita down to 9, thanks to all the life he paid to Necropotencec. After playing a Mogg Fanatic and another Jackal Pup, Hon declared his turn over. Nobushita's next turn included Illusions of Grandeur, Contagion (killing the Jackal Pups), and a large number of cards from Necropotence. Hon got him down to 18 with the Mogg Fanatic, but could do nothing to stop the Illusions of Grandeur from being Donated on turn four.

Game two went even better for Nobushita, as he started with a Duress, taking Hon's sideboarded Pyroblast. If there was a highlight of the game, it was in turn three, when Nobushita's Demonic Consultation turned up an Illusions of Grandeur on the eighth card. It was impressive, but since he had all four still in the deck, he was fairly certain to get one before too long.