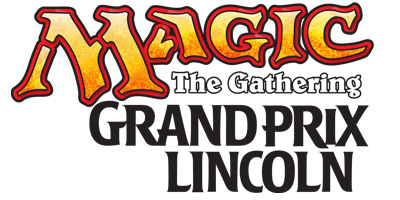 For the first time ever, the Grand Prix circuit makes its way to Lincoln, Nebraska! Will you be there for the first Modern Grand Prix? Make your plans now to join us in Lincoln.

There will also be vendors from all over the country ready to help you complete those last-minute changes to your deck incorporating the new tech you just discovered.

We are pleased to announce that Dan Scott will be our featured artist for the event!

Finally, PES has managed to arrange a fantastic room rate of $69 at a nearby Candlewood Suites! The Candlewood features studio rooms that have three beds, so you are able to share the cost even more. To receive this special rate, guests must identify themselves as part of Magic Grand Prix (Lancaster Event Center) and your group code is MGP. See the Hotel Information section below for more details.

Start the 2012 season strong by building your Planeswalker Points with Grand Prix Lincoln’s PWP multiplier of 8x and side-event PWP multipliers of 3x!

The main tournament at Grand Prix Lincoln is open to Magic players of all ages.

Judges and Admin Staff
The Head Judge for Grand Prix Lincoln is Scott Marshall. If you are a judge interested in volunteering, please submit an application through DCI Family here. If you have any questions regarding judging, please contact John Alderfer at rodetryp@gmail.com. We are accepting applicants until January 06, 2012. Send your applications early; we will consider all applications as they are received. Judge certification will be available on site.

For a complete schedule of Public Events, visit www.professionalevents.com. Here you will find not only the event schedule but information to help you plan every facet of your Magic weekend in Lincoln.

All Public Events at Grand Prix Lincoln will have a Planeswalker Points multiplier of 3x.

The featured artist at Grand Prix Lincoln is Dan Scott.

Lincoln, Nebraska has earned a reputation as one of the Midwest's most beloved cities. Home to fine culinary and artistic treasures; a budding live music scene; breathtaking parks, golf courses and trails; and a friendly Midwestern attitude, Lincoln offers the exhilaration of a big city and the serenity of the countryside all in one place.

The Lancaster Event Center is located just 11 miles from the Lincoln Municipal Airport and just minutes South of I-80.

Lincoln Municipal Airport (LNK) is the closest airport located 11 miles from the event site. Players arriving by air can use the shuttle, a taxi service, or rent a car to best reach the hotel. Shuttle service is provided by A&B Shuttle. You can reserve one way or roundtrip transportation by calling 402-475-5465.

Taxi service from the airport to the venue will cost about $35 one-way. Rental cars are available at the airport and driving directions can be found below.

You can get detailed driving directions by following the links on our Grand Prix Lincoln page under the “Directions” tab.

Parking is FREE at the venue and is very plentiful!