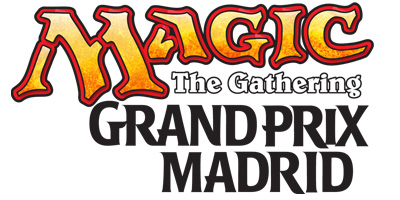 Take part in a weekend of serious Magic fun with a bunch of exciting things to do! Join the fun in Public Events including 8-player pick-up games, Legacy, Casual Standard Dueling and more. Meet Magic artists Aleksi Briclot and Jaime Jones and get your cards signed or try out Duels of the Planeswalkers. Or take part in the main tournament and get a cool foil promo card!

Whatever you want to do, Grand Prix Madrid will be a weekend to remember!

The main tournament at Grand Prix Madrid is open to Magic players of all ages.

Judges
The Head Judges for this tournament are Kevin Desprez and Riccardo Tessitori. If you want to become a judge or judge in this tournament, please contact Regional Judge Coordinator Alfonso Bueno at alfonsojudge@gmail.com.

All Public Events at Grand Prix Madrid will have a Planeswalker Points multiplier of 3x.

Aleksi Briclot and Jaime Jones will be in attendance at Grand Prix Madrid.

Magic Game Show
On Friday at 20.00h we start the Magic Game Show with our host Richard Hagon. It’s a Magic quiz you can participate with a team of 1 to 4 people. All you need to do is bring your friends! Registration is free and you can win some cool Magic goodies.

Arriving by Plane
The Madrid-Barajas airport is located within Madrid's transportation core zone, the A zone, and is conveniently served by the metro and local buses. A one-way metro ticket from the airport costs €2 (€1 additional airport surcharge included), and will take you anywhere within the A zone. Alternatively, you could buy a tourist pass, which also includes the airport surcharge. To get to the site, take line 8 to Nuevos Ministerios, and then change to L6, to Alto de Extremadura.

Arriving by Train
Most of the trains arrive at the Atocha station. From there, you can take the metro or bus 36 (stop Pº Extremadura- Albéniz) to get to the venue. The site is accessible from the metro station Alto de Extremadura (L6). If arriving at the Chamartín station, you can take metro line 10 directly from there and change to L6 in Nuevos Ministerios.

Arriving by Car
Madrid is at the center of all major roads in Spain. Motorways A1 to A6 will take you straight to Madrid.