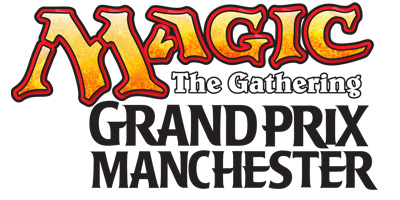 The United Kingdom has many great cities but none are as much fun as Manchester. A Grand Prix Manchester is in the centre of town, you'll be able to experience it all—home of two of the UK's greatest football teams, it also has a thriving nightlife and some awesome attractions.

Getting to and from Manchester is also very simple as its international airport connects to most major European cities. Also, you can arrive via the train by traveling on Eurostar to London and getting a direct train to Manchester.

The main tournament at Grand Prix Manchester is open to Magic players of all ages.

Judges
The Head Judges for this event will be Kevin Desprez and Carlos Ho.

In addition to the main event, there will be Magic tournaments in a variety of formats running from Friday to Sunday. More Information on public events, artists and other attractions will be published by Gordian Knot Games on their website.

Volkan Baga will be in attendance at Grand Prix Manchester. An additional artist may be announced at a later date.

Arriving by Plane
Manchester International Airport is under 10 miles from the event venue taking approximately 25 minutes by taxi, or alternatively there is a direct half-hourly express rail service to the city centre that takes approximately 20 minutes.

Arriving by Train/Metrolink
Manchester has direct rail connections to all major UK cities – London is just over two hours away by train. Services come into the city at either Piccadilly or Victoria station, both of which connect to Manchester’s Metrolink light-rail system which provides easy access to all parts of the city centre. Take the Metrolink from either Piccadilly or Victoria (in the Altrincham or Eccles direction) and alight at St Peter’s Square, which is within a 5-minute walk of Manchester Central. You can also take advantage of the free Metroshuttle bus that travels between the two stations across the city centre.

Arriving by Car
Manchester is at the heart of the Northwest’s motorway network with easy access from all directions onto the M60, the city’s orbital motorway. Once on the M60 exit at Junction 12 and join the M602 signposted towards the city centre. Follow the A57 straight on from the end of the M602 passing under a railway bridge before taking the left hand exit to merge onto the A56 Bridgewater Way. Turn right onto Whitworth Street West at Deansgate station and then turn left onto Albion Street. The entrance to the Manchester Central Car Park is through the next set of traffic lights on the left, opposite The Bridgewater Hall.

If you are using sat nav, type in M2 3GX which will take you to the car park at Manchester Central.