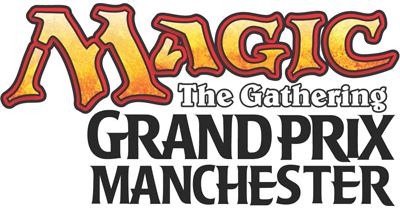 ALL REGISTRATION CLOSES AT 22:00 ON FRIDAY MAY 30. THERE WILL BE NO SATURDAY REGISTRATION.

Grand Prix Manchester 2014 will be an incredible event. Theros Block Constructed will provide plenty of fun for all groups of Magic players and this is going to be the first GP featuring this great format. The backdrop to this exciting tournament is possibly the country's most exciting city. With virtually every type of entertainment and restaurants available, there should be something for every palette.

The main tournament at Grand Prix Manchester is open to Magic players of all ages.

Judges
Judges interested in working at this event should submit an application through the Magic judge website .

Along with the main event, there are additional side-event tournaments to play in at a Grand Prix. Listed below are the side events offered at all Grand Prix on Friday, Saturday, and Sunday. Additional events and a full schedule can be found on the gordianknotgames.co.uk/magicgrandprix.html website. All side events (except casual events) will have a Planeswalker Points multiplier of 3x.

We have a real treat at Grand Prix Manchester as three great artists will be joining us to sign cards. You can find links to their work below as well as their minimum opening times. Please only bring a maximum of 20 cards for signing and 1 alteration per visit to the artist. This also applies during the VIP time.

Arriving by Train
Recommended Airport: There are two main train terminals in Manchester.