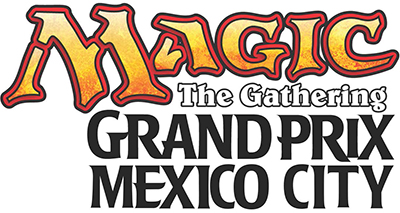 Format: Born of the Gods/Theros Sealed Deck and Booster Draft

Welcome to Mexico City, one of the largest cities in the world and home to more than 21 million souls. Grupo Necrotower is responsible for this great event, and we are proud to hold our fourth Grand Prix in the country. Once more we expect players from all over Mexico and the world to join us in this great celebration.

In addition to the Grand Prix we'll have side events scheduled throughout the weekend for competitive and casual players alike. If you feel like testing your best Standard deck or just want to have a few commander multiplayer matches, you can be sure we'll have something for you.

The first 700 players to register in person for the main event will get a limited-edition commemorative playmat by Lucas Graciano, one of our guest artists. So make sure to register as early as possible!

The main tournament at Grand Prix Mexico City is open to Magic players of all ages.

Along with the main event, there are additional side-event tournaments to play in at a Grand Prix. Listed below are the side events offered at all Grand Prix on Friday, Saturday, and Sunday. Additional events and a full schedule can be found on the Grand Prix Mexico City website. All side events will have a Planeswalker Points multiplier of 3x.

Lucas Graciano and rk post will be our special guests for this event. They will be signing cards and sketching throughout the weekend, so don’t forget to bring your favorite cards to their booth.

From the airport, the easiest way to get there is to take a yellow cab—tickets are sold inside the airport. The official rate should be around $20-$25 USD.

You can check a map of the area, and venue location here.