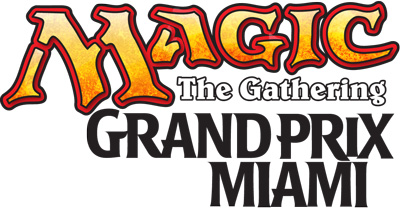 However, you'll also be surrounded by thousands of fellow fans, as much Magic as you can fit into one weekend, plus artists Eric Deschamps, Zoltan Boros, and—making his first U.S. Magic event appearance ever—guest of honor Greg Staples!

On June 28-30, find out why Miami is really nicknamed "The Magic City"!

The main tournament at Grand Prix Miami is open to Magic players of all ages.

Judges
The Judge Staff for Grand Prix Miami is set, but you can still attend the Judge Conference on the Friday of the Grand Prix.

Along with the main event, there are additional side-event tournaments to play in at a Grand Prix. Listed below are the side events offered at all Grand Prix on Friday, Saturday, and Sunday. Additional events and a full schedule can be found on the StarCityGames.com. All side events will have a Planeswalker Points multiplier of 3x.

Legendary Magic the Gathering artist and guest of honor Greg Staples joins us from the United Kingdom and makes Grand Prix Miami his first U.S. Magic: The Gathering event appearance ever!

StarCityGames.com is proud to welcome Zoltan Boros, illustrator of all ten Return to Ravnica/Gatecrash charms and countless more of your favorite Magic cards, to Grand Prix Miami.

Rounding out an all-star roster is the artist behind many of Magic's most popular Planeswalkers! Please join us in welcoming Eric Deschamps to Grand Prix Miami.