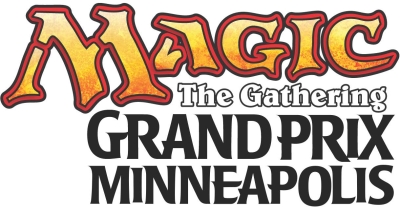 Welcome back to Minneapolis! #GPMINN will feature a custom playmat designed by Tom Baxa given to the first 750 players on site on Friday afternoon (first come, first served). We'll have a free Mini Master event Friday afternoon as further incentive to show up and get your weekend of Magic started on Friday! Artists Tom Baxa and rk post will both be onsite, and we expect to add 1 or 2 more artists as we draw closer to the event.

The group hotel rate is at the Westin Minneapolis, which is 7 blocks away from the Convention center, but is located conveniently on the light rail line coming in from the airport and the downtown Nicollet free shuttle. The light rail line will run you from downtown to the airport for only $2.25 each way. The same rail runs all the way to the Mall of America (south of the airport). Just outside of the Westin is Nicollet Avenue, a pedestrian avenue that plays host to lots of great shops and restaurants. There is a free shuttle running the length of Nicollet Avenue that picks up every 15 minutes and drops off right at the front door of the convention center. Super convenient!

The main tournament at Grand Prix Minneapolis is open to Magic players of all ages.

Judges
The head judge for Grand Prix Minneapolis will be Toby Elliott (Level 5, UK). Judges interested in applying for this event should do so through the Judge Center.

Along with the main event, there are additional side-event tournaments to play in at a Grand Prix. Listed below are the side events offered at all Grand Prix on Friday, Saturday, and Sunday. Additional events and a full schedule can be found on the www.legionevents.com website. All side events (except casual events) will have a Planeswalker Points multiplier of 3x.

Tom Baxa and RK Post will be at Grand Prix Minneapolis.

VIP service is available and will feature a separate, quiet lounge with device charging stations, special pairings boards for VIP only, and bag storage.

If you are flying into Minneapolis, the airport code is MSP. The least expensive transportation from MSP to downtown is light rail, which has a stop right outside the player block hotel at the Nicollet mall station. If cabbing downtown, expect a cab to run between $30 and $40. The player room block is set at the Westin Minneapolis at a rate of $110 and the block is held and rate guaranteed through April 14th, while rooms are still available.

Players driving in daily can choose multiple parking facilities right around the convention center. The most convenient parking ramp for our hall location is located next to the Central Lutheran Church across the street from the convention center on 3rd avenue. Free parking is available on the street between 6:00 p.m. Friday and 8:00 a.m. Monday; if you get there early enough you could park for free!

Once inside the Convention center, Exhibit Hall A is located on the lowest floor near the east end of the center.