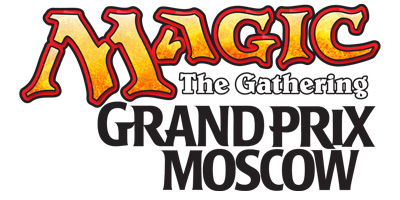 The Russian capital Moscow has become a modern metropolis and one of the world’s business and scientific centers. It is home to more than 10 million people, of which millions emigrated from the former Soviet republics. The city covers more than 1,000 square kilometers, and receives more than 4 million tourists a year. It hosts offices of the world’s biggest companies and banks in a financial center and has an industrial center with aerospace factories and high-tech business.

Combine your trip to Grand Prix Moscow with a visit to Red Square, a tour of The Kremlin, or any of the many other attractions in this fantastic city.

The main tournament at Grand Prix Moscow is open to Magic players of all ages.

Judges
The Head Judges for this event will be Riccardo Tessitori and Scott Marshall. The regional coordinator is Eugene Bazhenov.

In addition to the main event, there will be Magic tournaments in a variety of formats running from Friday to Sunday, such as big Legacy, Standard and Sealed Deck events, Chaos drafts, Two-Headed Giant events, drafts, and more. More information on public events can be found at www.tournamentcenter.eu.

Aleksi Briclot and rk post will be in attendance at Grand Prix Moscow. Briclot is a French illustrator for books, RPG books and magazines. He’s also a comic book artist, and works as a concept artist and art director in the videogame industry. All five original Planeswalkers are from his hand, as well as Gideon Jura, Tezzeret, Agent of Bolas and Primeval Titan. Post was born in 1968 in Iowa, USA. After finishing his illustration classes, he focused on fantasy illustration in the gaming field. He has been contributing art to the game since Exodus, and is still active as an artist. His most famous card art includes Morphling and Avatar of Woe.