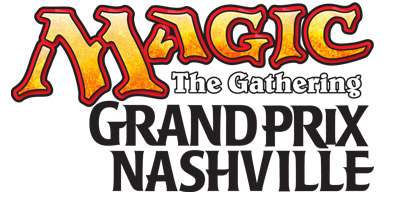 The first Grand Prix in Nashville, Tennessee saw over 1500 players doing battle with Sealed Decks from Scars of Mirrodin. Now the Grand Prix circuit returns to Nashville again with a Sealed Deck format, this time facing the rivals from Innistrad.

Grand Prix Nashville will not only immerse you while playing Magic, but it will totally invigorate you in one of the most unique and historic cities in the South. Nashville is well known worldwide as Music City U.S.A., but the city also offers a taste of southern hospitality as well as some great historic landmarks. The location site is the sprawling Gaylord Opryland Hotel and Convention Center. With every possible convenience you could ask for in a hotel from fast food to fine dining, convenience store items to luxury shopping, and peaceful quiet places to an electric nightclub; Gaylord Opryland has it all under one roof.

Don’t take our word for it, come experience Magic: The Gathering at its finest at Grand Prix Nashville. The doors open at noon Friday. Plan to stay all weekend as there are many events scheduled and plenty of side events for any player. Come get cards signed by Magic artists Steve Argyle and rk post, play against spellslinger and Magic R&D developer Zac Hill, and enjoy all of the events. Visit www.tnlg.net for more information about the public events schedule as well as the latest announcements about the event. Don’t miss the Grand Prix event of the year!

The main tournament at Grand Prix Nashville is open to Magic players of all ages.

Judges
For information on how to volunteer as a judge, contact James Elliott.

Visit www.tnlg.net for more information and a full Public Events schedule as well as the latest information on artists, spellslingers and more!

All Public Events at Grand Prix Nashville will have a Planeswalker Points multiplier of 3x.

We have two amazing artists for Grand Prix Nashville: Steve Argyle and rk post. They will be making appearances Saturday and Sunday.

Nashville International Airport is less than 10 minutes from the Gaylord Opryland Hotel. You can take a cab or shuttle. Hertz is the preferred car rental for Gaylord Hotels and offers discounts to guests.

Grand Prix Nashville is being held at the Gaylord Hotel and Convention Center. The hotel is a grand experience and has offered a discounted rate at $169 (normally $249) you can visit the link here or call the sales office at (615) 458-2800 and mention the code X-MTG12.

If you are driving in from out of town you can take any of the interstates that lead into Nashville and look for Briley Parkway. This is an parkway that loops around Nashville. You want to go towards the airport unless you are coming in from I-40 east, then you want to go west. Get off at the Opryland Hotel exit and follow directions to the hotel.