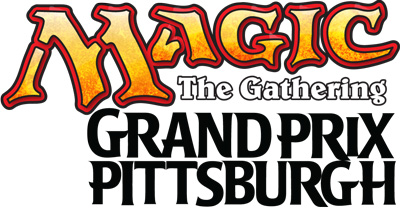 Pittsburgh is a destination for all ages who quickly discover what locals already know—Pittsburgh is fun, affordable, and packed with entertainment. Enjoy a host of attractions that educate and entertain in the city named one of the top five cities to visit in the Northeast. Pittsburgh's downtown is compact, safe, pedestrian-friendly, very action-packed, and home to 100 restaurants, six live theaters, and a multitude of night-life action. And, it's just minutes away from the David L. Lawrence Convention Center, the location of the Grand Prix Pittsburgh!

Grand Prix Pittsburgh is open to the public and all players are invited to take part in the weekend's wide range of activities. Grand Prix Pittsburgh is a two-day event featuring a Gatecrash Sealed Deck on Saturday and Gatecrash Booster Draft on Sunday. In addition to the main event, the Grand Prix Pittsburgh weekend offers one of the largest schedules of side events ever brought to a Grand Prix, including an opportunity to win a VIP trip to Seattle in January, 2014. Public Events and Last-Chance Grand Prix Trials will be held Friday, March 22, 2013 on-site starting at noon. Visit www.professional-events.com for more details about public events.

Prominent Magic artists Christopher Moeller and rk post will be on hand for free signings of your favorite cards, plus you'll have the opportunity to buy prints and even original artwork.

Are you going to Grand Prix Pittsburgh? Let your friends know and get up to date information by joining the Facebook event!

The main tournament at Grand Prix Pittsburgh is open to Magic players of all ages.

Judges
The Head Judge for Grand Prix Atlantic City is Jeff Morrow. Judge applications are closed. Judge certification will be available on site. Please contact Alex Bastecki at alex.bastecki@gmail.com for details and to arrange your certification.

Have some byes and don't want to get up to register your deck at 9 a.m.? Here's a deal for you! If you have byes and register any time before Friday at 10 p.m., you are eligible for the "Sleep-In Special." Unfortunately, players with byes who register on Saturday are not eligible for the Sleep in Special.

You may ONLY skip the player meeting and deck registration/construction if you paid for the Sleep-In Special.

Cost: $20 USD (regardless of number of byes)

How the Sleep-In Special works Once you have paid for the Sleep-In Special, a sealed deck card pool will be registered and verified on your behalf. Instead of arriving at 9 a.m. for the player meeting, you will check in prior to your first round of play (based on your number of byes) and receive a preregistered pool. Preregistered decks are chosen at random for each Sleep-In Special from the selection of preregistered decks. From the time when you get the pool, you will have 30 minutes to construct your deck and turn in your decklist. You begin play for the proper round after your byes and continue as normal.

You will need to report a minimum of 30 minutes PRIOR to the start of your first round of play. The estimated round start times for Saturday are:

Prominent Magic artists Christopher Moeller and rk post will be on hand for free signings of your favorite cards, plus you'll have the opportunity to buy prints and even original artwork.

Pittsburgh is a well-connected city. Its location in Western Pennsylvania makes it convenient to get to by air and ground transportation, and once you're here, getting around is easy. More than half the U.S. population is within a 500-mile drive or 90-minute flight from Pittsburgh. It's less than 6 hours by car or train from nine states, Washington, D.C., and Canada.

Want to fly in? Fly into Pittsburgh International. Getting from the airport to Downtown Pittsburgh is a cinch, with convenient shuttle service as well as affordable, regular bus service.

From the Airport
Take I-376 E (towards Pittsburgh) through the Fort Pitt Tunnel and across the Fort Pitt Bridge. Take Ft. Duquesne Blvd Exit 6C. Follow sign to Convention/Strip District on 10th Street Bypass. Convention Center located on the right.

From the West | PA Turnpike
I-76 E (PA Turnpike) to Exit 28 Cranberry. Follow signs to I-79 S to I-279 S across Ft. Duquesne Bridge to 10th Street Bypass. Convention Center located on the right.

From the North
I-79 S to I-279 S across Ft. Duquesne Bridge to 10th Street Bypass. Convention Center located on the right.

From the South
I-79 N to Exit 59 A Pittsburgh to I-279 N through Ft. Pitt Tunnels and across the Ft. Pitt Bridge. Take Ft. Duquesne Blvd Exit 6C. Follow sign to Convention/Strip District on 10th Street Bypass. Convention Center located on the right.

For more information on available parking within a 15-minute walk of the Convention Center, click here.