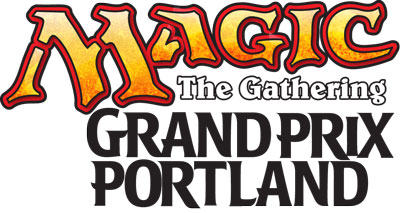 Portland will crown the Pacific Northwest's penultimate master of Modern! Magic: The Gathering returns to the Rose Quarter in the second North American Modern Grand Prix of 2013. This event is open to the public and allows casual and competitive players to participate in a large event celebrating Magic's newest constructed format. Planeswalker Point multipliers of 8x for the main event and 3x for all other events will pump your point totals like no other weekend.

Cascade Games, LLC, has special events planned all weekend to cater to every type of Magic enthusiast. National dealers will be on hand to sell you the sought after rarities you need to finish out your favorite decks. Acclaimed artists such as the incomparable rk post will also set up shop to meet their fans, sign cards, offer sketches and other exclusives. Whether you want to challenge hordes of other players for Grand Prix supremacy or just spend a relaxing weekend playing casually with other gamers, Grand Prix Portland has something for you.

Pre-registration will be available for this event. A sleep-in special which allows players with byes sleep in and arrive late (for a fee) to the Grand Prix will also be available. Details on both options will be shared on the Cascade Games event page.

The main tournament at Grand Prix Portland is open to Magic players of all ages.

Daarken, rk post, Tyler Jacobson, and Mike Drindenberg will be in attendance at Grand Prix Portland.

Public transportation in Portland is extremely accessible, with light rail (MAX), street cars and buses connecting most points of interest in the city. There is a direct MAX line from the airport to the Grand Prix Portland venue, and there is free MAX access from the venue to downtown Portland hotels and restaurants.

From I-5 Southbound: Take Exit 302A (Rose Quarter/City Center Exit) go across Broadway, then left on Weidler, and right on Martin Luther King Jr. Blvd.

From I-84 Westbound: Take Exit 1 (Lloyd Blvd.) stay on Lloyd Blvd. all the way to the Convention Center.

From the Portland International Airport (PDX)

Parking at the Convention Center

If you are coming by car, you can park at the onsite parking garage for less than $10 a day (rates vary by day). There is additional paid parking on street and at other lots within walking distance of the venue.

Portland's light rail (MAX) provides a direct line from the airport to the Grand Prix Portland venue (Oregon Convention Center) with service every 15 minutes from 5am to midnight. The MAX line continues across the river into downtown Portland with stops at or a short walk from many area hotels. MAX fare from the airport to downtown is $2.30. Taxi and shuttle service is also available from PDX; depending on traffic, expect to spend 20-40 minutes and $25-45.

Travel by Train or Bus

Amtrak and Greyhound serve Portland from most major US cities. Both stations are located in NW Portland, with light rail (MAX) and bus service available from the stations to hotels, restaurants, and the Convention Center.

It is Portland after all. Yes, there are bike racks at the Convention Center. Yes, you can take your bike on public buses and light rail (MAX). Yes, designated bike lanes are available on most bridges and major roads.