major Magic events are looming on the immediate horizon. On the weekend of March 26th & 27th there will be Grand Prix tournaments in both Birmingham, England and Columbus, Ohio in the USA. The tournaments will each be Limited format using Mirrodin/Darksteel Sealed Deck cutting to Mirrodin/Darksteel booster draft. Oh yeah…each tournament will feature a total cash prize payout of $25,000!

I travel all around the world doing event coverage for magicthegathering.com—in fact I will be in Columbus doing just that—and I am always struck by the common misperceptions about Grand Prix tournaments that many players have. The most common one seems to be that many players think you need to qualify for these tournaments.

All you need to do to play in a Grand Prix is show up and pay your entry fee! In fact, Grand Prix tournaments are in essence super Qualifiers for the Pro Tour. The Pro Tour is a $1,000,000 a year tournament series that is only open to qualified players. Almost any weekend of the year you can find a qualifier—or PTQ as they are commonly called—which will award a lone invitation to play in a Pro Tour event. The Grand Prix tournaments will award eight invitations to the top eight players who are not already qualified.

One of the interesting facets of these tournaments is that unlike PTQs, players who are already qualified for the Pro Tour can participate in Grand Prix events. This is an opportunity to interact with some of the games biggest names. As I previously mentioned these players cannot take a slot away from an unqualified player and the invitations will pass down until they are in the hands of eight players that were not qualified for the Pro Tour before the tournament.

It is also pertinent to note that $17,500 of the prize payout is awarded to the Top 32 players with the winner taking home $2,400. Prizes go down to thirty second place who receives $250 for his or her efforts. The remaining $7,500 is reserved exclusively for players who have never received a Pro Tour Point. These points are awarded to anyone who has ever played in a Pro Tour of finished in the Top 32 of a Grand Prix. The top 16 players without a Pro Tour Point—otherwise known as having amateur status—win money with $1,500 going to the top such player and down to $250 for 16th.

It is interesting to note that the amateur prize is awarded regardless of any other money that player might win over the weekend. It is conceivable for the same person to win the $2,400 first prize and $1,500 amateur prize. There have been tournaments where a high finishing amateur has walked away with a bigger check that the person who actually won the tournament! 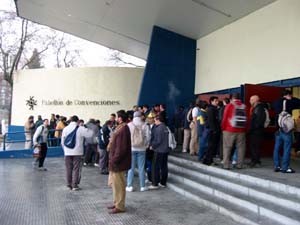 With so much money on the line these tournaments attract pretty large crowds. It is rare for a Grand Prix to draw less than 250 players and a recent event in Madrid set a new attendance record with over 1,350 players! The attendance in both Birmingham and Columbus is likely to lie somewhere in between those two figures. Whittling down that field into a single winner requires two days of Swiss style play. (This means that players get to play for some predetermined number of rounds regardless of their record.)

The tournament begins on Saturday with Sealed Deck play. Each player will receive a Mirrodin tournament pack and two Darksteel boosters. With an unlimited supply of basic land at your disposal you will use these cards to construct forty-card minimum decks. (You can choose to play more than forty cards but I strongly discourage you from doing so.) This will be the deck that you will use for the rest of Day One. If you want to get an idea of what a successful build looks like you should avail yourself of event coverage from the past few grand Prix events with the same format—Oakland, Madrid, and Hong Kong.

After between seven and nine rounds—the exact number is determined by attendance—the top 64 or 128 players will advance to the second day of play. Players will be broken up in to tables of eight players—sometimes called pods--and play booster draft for six rounds on Sunday. The draft will use two Mirrodin packs and one Darksteel pack. Booster draft consists of opening up one of your Mirrodin packs and selecting a single card you want for your potential deck. You then pass the remaining cards to the player on your left. The player to your right passes you his pack and you select another card.

This continues until the last remaining card is passed. You repeat this process with the second Mirrodin pack although you pass it in the opposite direction. The last pack is Darksteel and it is passed in the same direction as the first pack. When the process of drafting is concluded you will have 45 cards that you will use to construct a deck. You will then use that deck for three rounds against other players from your draft table. At the end of three rounds you will be seated at new eight person tables and draft again. Once again I urge you to look at draft coverage from the three previous Grand Prix events to get ideas about drafting this format.

After the final three rounds of play the tournament will cut to the Top 8 players. The remaining eight players will sit down to one final draft table. From this point the tournament becomes a single elimination bracket. When all the dust settles one player will be the Grand Prix Champion and at least $2,400 richer. Prizes will be awarded in the following amounts based on the final standings.

The main tournament is only a small part of the action at the Grand Prix over the weekend. The action usually kicks off on Friday night with a Grand Prix Trial tournament. A Trial is a tournament that features an unusual prize—three rounds of byes to the Grand Prix itself. A bye is an awarded win for a round. Grand Prix are unlike any other tournament in that players may have up to three rounds of byes—meaning they would begin play in the fourth round with a 3-0 record—based on their DCI rating or Pro Player status. If you think you have byes you should consult the webpage for the Grand Prix you are planning to attend . There will be a list of all the awarded byes organized by name.

For players with less than three byes there are tournaments called Trials where you can win this early tournament advantage as well as boxes of product. Since they are the same format as the Grand Prix they are usually good practice for the main event to boot. One of the hidden advantages of byes is that they have the best possible effect on your tiebreakers which have a significant effect on how you place within a group of players with the same record as you. If you have the opportunity to play in the Trial the night before I highly recommend doing so.

In addition to the main event there are a host of other reasons to attend a Grand Prix. There are many dealer tables at the event with vendors looking to sell hard to find cards or even buy cards from your collection. It is also one of the greatest Magic bazaars in the world. There are literally hundreds of players looking to trade Magic cards and you can get almost any card you ever wanted if you make the right offer. 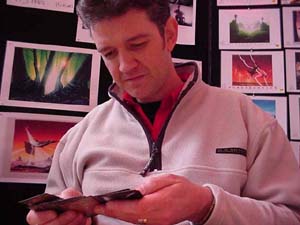 Another feature of Grand Prix tournaments is that there is always a guest artist who signs cards and sells original artwork and prints. Players at the Grand Prix in England will have the opportunity to meet John Avon. Players in Columbus will get to meet Jeremy Jarvis.

There are also side events that run throughout the weekend at these events—usually beginning on Friday night. There are Vintage tournaments, Standard tournaments, and more Booster Drafts than you could ever imagine. On Sunday there is also a PTQ for players that did not advance to the second day of competition.

Check the Grand Prix event schedule for all the specifics about location, direction, area hotels, and how to contact the tournament organizer for any questions that are not addressed on the page. If you are fortunate enough to be able to attend either of these high energy events you will not regret it.