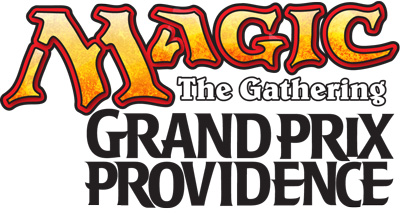 Welcome to Providence, Rhode Island and the first three-person team Grand Prix in the eastern United States in nearly a decade! Get together with your friends and see if you have what it takes to be a Grand Prix team champion.

Providence combines the accessibility and friendliness of a small town with the culture and sophistication of a big city. Providence is the capital and most populous city in Rhode Island and was one of the first cities established in the United States. With a thriving arts community, vibrant and diverse neighborhoods, outstanding hotels, a renowned restaurant scene (Travel + Leisure readers voted Providence one of America's Favorite Cities, ranking the city #2 in the U.S. for food) and so many things to do, Providence is the perfect place to visit. The city's compact size and convenient location make it easy to get to and hard to forget.

Grand Prix Providence is open to the public and all players are invited to come and participate. Grand Prix Providence is a two-day event featuring Return to Ravnica Block Team Sealed Deck on Saturday and Return to Ravnica Block Team Draft on Sunday. In addition to the main event, the Grand Prix weekend offers one of the largest schedules of public events ever brought to a Grand Prix — including an opportunity to win a VIP trip to Seattle in January 2014! Public Events and Last-Chance Grand Prix Trials start Friday, June 7 at noon. Visit www.professional-events.com for more details about public events.

Can you tame the three-headed beast at Grand Prix Providence? If you didn't already have enough reasons to attend Grand Prix Providence just to play the amazing Team Sealed Deck format, the first 250 teams that register on-site Friday will receive exclusive playmats by Steve Prescott. For those players who have attended Grand Prix Atlantic City and Pittsburgh, you'll recognize the seasonal pattern continuing with the "Summer" theme to this playmat!

Are you going to Grand Prix Providence? Let your friends know and get up to date information by joining the Facebook event! 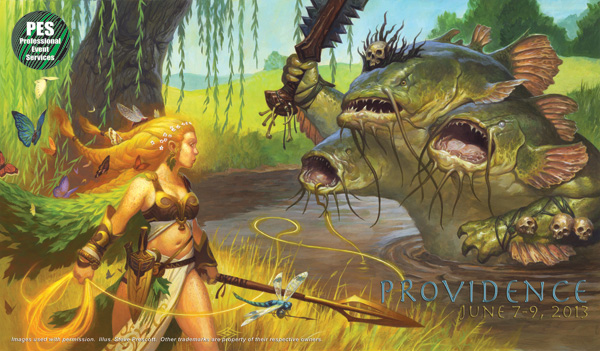 Does your team have some byes and don't want to get up to register your deck at 9 a.m.? If you have byes and register any time before 10 p.m. on Friday, you are eligible for the "Sleep-In Special". An additional charge of $45 for your team buys you more sleep and a pre-registered deck.

You may ONLY skip the player meeting and deck registration/construction if you paid for the Sleep-In Special.

Cost of the Sleep-In Special is $45 USD per team regardless of number of byes.

Once you have paid for the Sleep-In Special, a sealed deck card pool will also be registered and verified on your behalf. Instead of arriving at 9 a.m. for the player meeting, you will check in prior to your first round of play and receive a preregistered pool. Preregistered decks are chosen at random for each team from the selection of preregistered decks. From the point when you get the pool, you will have 60 minutes to construct your decks and turn in your decklists. You begin play for the proper round after your byes and continue as normal.

The main tournament at Grand Prix Providence is open to Magic players of all ages.

Judges
The Head Judges for this event will be Jurgen Baert and Kevin Desprez. The Regional Judge Coordinator is Richard Drijvers. Judges interested in working at this event should submit an application through the Magic judge website .

Prominent Magic artist Steve Prescott will be on hand for free signings of your favorite cards, plus you'll have the opportunity to buy prints and even original artwork. We will be adding more artists, so check back!

Just an hour from Boston and three hours from New York City, Providence is a capital that is easy to get to and easy to get around in. It boasts a convenient airport, fast and reliable train service, and a simple bus system, meaning you can get there from here.

Located just 10 minutes from downtown Providence, Warwick's T.F. Green Airport (PVD) was recently named one of the top five airports in the US by Travel + Leisure magazine. Just off Exit 13 on Interstate Route 95, Green Airport is accessible to Boston, Cape Cod and Southeastern New England, and is fast-becoming a popular alternative to Boston's Logan Airport.

From 95 S:
Take Exit 22A, Downtown Providence. Follow the signs towards Downtown/Convention Center. Go through the 1st light in the right-hand lane. Take your 1st right after the light. Continue to the second light; take a right onto Exchange Street. At the stop sign, take a right onto Exchange Terrace. Proceed straight through the next set of lights, bear left at the fork onto Sabin Street where you will find the RI Convention Center.

Click here for detailed information on parking in downtown Providence.

Providence is located on Amtrak's Northeast Corridor between Washington DC/New York City and Boston. High speed Acela Express train service transports passengers from New York City to Providence in about two and a half hours. For tickets call 1-800-USA-RAIL or visit www.amtrak.com.