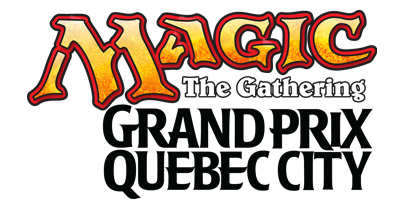 Gorgeous landscapes. Natural, cultural, and historical attractions. Outdoor activities minutes from town. Internationally renowned festivals and events. Here, it's all within reach. Join us in Canada's Winter Wonderland, Québec City, just one week after Pro Tour Gatecrash and the famous winter festival, Carnival. The city is a short train ride from Montreal and a host of other eastern cities. Whether you come for the weather or to stay out of it, Grand Prix Québec City will give you plenty of opportunity to scratch your Magic: The Gathering itch in a beautiful and historic winter setting.

Join hundreds of other Magic players for a weekend of tournaments, artists, vendors, and great prizes. If Standard isn't your thing, there will be a host of events to satisfy virtually every format enthusiast. Or simply stop by to see what all the fuss is about, get some cards signed by our attending artists, do some trading, or finish up a Commander or Legacy deck with a visit to our many vendor booths. The weekend has plenty in store for every Magic enthusiast. Visit www.westcanevents.com to see all the details.

The main tournament at Grand Prix Québec City is open to Magic players of all ages.

Randy Gallegos, Mike Bierek, and Seb McKinnon will be in attendance at this event.